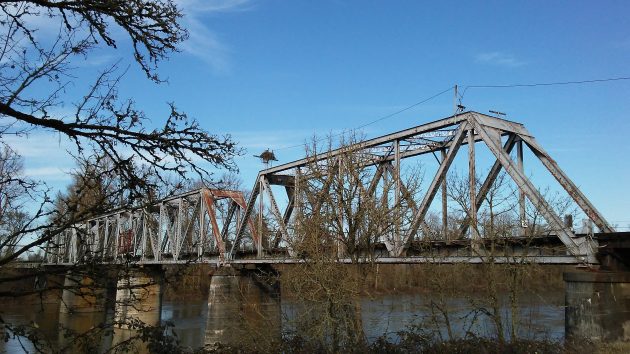 It’s hard to see the squatter, until you take a closer look (below).

Mr. and Mrs. Osprey are not going to happy if they now return to their nest atop the steel railroad bridge across the Willamette River at Albany. Somebody else has taken up residence in their customary abode.

My bike and I were cruising down the riverside Dave Clark Path on Monday, enjoying the afternoon sunshine. Loud squawking from the river drew my attention. The racket was coming from a pair of Canada geese that were settling in on one of the pylons on the river’s far side. Then I looked up, and another goose was looking around from the long-established osprey nest on top of the old electric or telegraph pole up there.

Keeping in mind that “digital zoom” is not what might be wished, here’s a closer look: 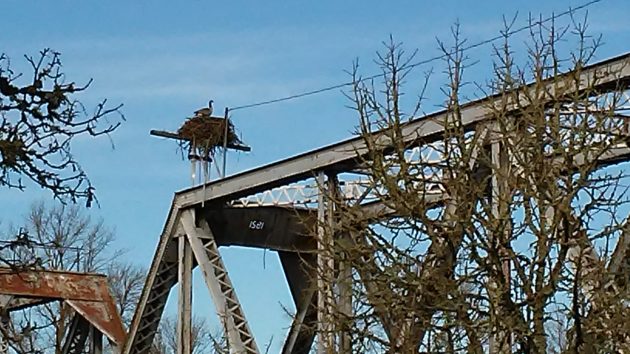 This was just one goose. Possibly its mate was out and about, looking for a better spot. But what happens if the newcomers decide to stay and sit on a couple of eggs until they hatch? And the ospreys that built the nest come back and find them there?

Geese taking over osprey nests, I learned online, are nothing new. In 1987 the Journal of Raptor Research, published by the Raptor Research Foundation in Waco, Texas, reported the results of a five-year study of nest site competition between Canada geese and ospreys at Lake Almanor in California. The lake is in Plumas County, about 60 miles east of Red Bluff.

Daniel Airola had observed dozens of osprey nests near the lake over five springtime nesting seasons from 1980 through 1984. “My observations show,” he wrote, “that Canada geese can appropriate and successfully defend a nest site from ospreys, causing osprey reproductive failure. Results support (a previous researcher’s) conclusion that conflicts are most likely to occur during years with cold spring weather.”

Reproductive failure? That sounds serious. But Airola adds a reassuring note: “Effects of nest site competition on reproduction by both species appear to be minimal…. Geese disrupt osprey reproduction too seldom to substantially affect the osprey population at Lake Almanor.”

Let’s hope that what was true on one lake in the Sierra Nevada in the 1980s holds true even now, and in the Willamette Valley too. (hh)

4 responses to “High above river, a nest fight looms”