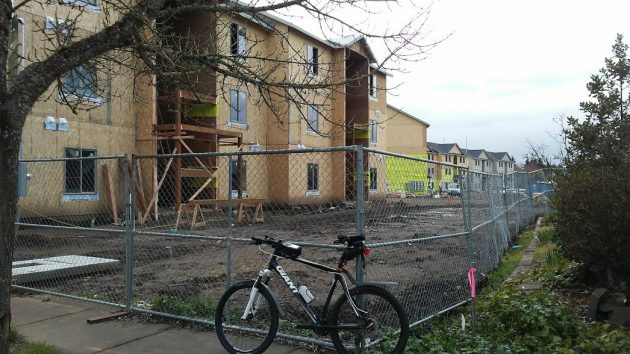 The Hickory Hollow apartment complex is the first of its kind in North Albany.

The first apartment complex to be built in North Albany will be ready for tenants this summer. That’s the word from Charles Weathers of Salem, the developer of the four buildings with 12 units each.

Someone interested in living there asked me about it recently. This week I got in touch with Weathers via email.

“While things are moving along nicely, I can’t yet put a completion date on the record,” he replied. “My goal is to have it wrapped by end of July, but that will depend on continued on-schedule work from subs and suppliers, a cooperating forecast, and timely approval of code compliance and final occupancy from the City.”

Prospective tenants will have to hold their horses for a few more weeks. Weathers says he plans to select a property management company before the end of April and then will begin “pre-leasing” shortly after that.

The complex, “Hickory Hollow” because it’s off Hickory Street, was opposed by residents of the single-family residences in the vicinity. But the zoning of the property allowed for the project as proposed even though, except for the big Bonaventure retirement home nearby, the area has been built up with single-family houses.

While this is the first apartment project built in North Albany, a larger one had been proposed on the east side of the North Albany Village shopping center. The city last year rejected a rezoning request for that site of nearly 13 acres, but it’s already zoned to allow up to 380 apartments. At last report the owner, Jim Winkler of Portland, was still considering what to propose next. (hh) 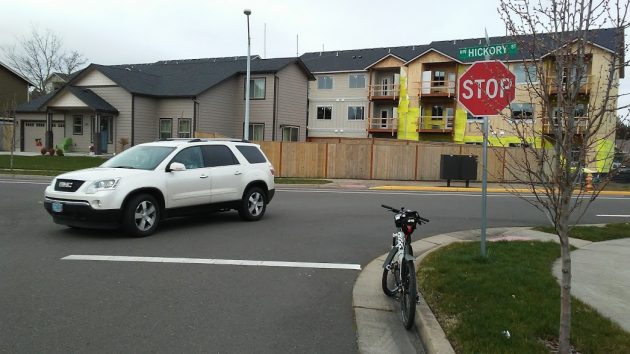