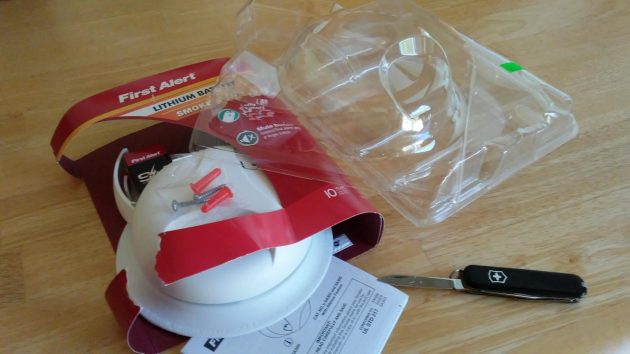 It takes a pocket knife to pierce and cut the stiff plastic armor surrounding items like this.

Only four months to go before our overseers in the state legislature will make people in Albany and the rest of Oregon give up the convenience of free shopping bags of thin plastic. But another kind of plastic — much thicker and sharp, and capable of slicing your skin if you’re not careful — remains free to be used.

By now everybody is probably reconciled to the loss of free shopping bags at the supermarket and any other store. Portland, Corvallis and a few other towns banned them years ago. This year the legislature passed House Bill 2509, which prohibits single-use shopping bags statewide starting Jan. 1 and threatens any store that hands one out with a potential $250 fine. The law graciously allows merchants to provide reusable bags, but only if they charge 5 cents apiece.

The idea is to cut down on plastic pollution, which by itself is a worthwhile cause. Well then, how about banning all those plastic bubbles and similar packaging, the kind that ends up in landfills (if we’re lucky) and probably lasts there for hundreds of years.

The material feels like it lasts that long because of how tough it is and how hard it is to open the wrappings made from it. You can’t just tear them apart. You have to attack them with a blade. And watch out when you do. You want to avoid the plastic edges; they’re as sharp as whatever it is you cut them with.

Manufacturers put their stuff in those packages for a reason, no doubt, maybe so they withstand the long trip from China. And consumers buy their stuff beccause they have no other choice. So this is an area where Oregon lawmakers could help us out instead of complicating our life. If that kind of packaging was banned, the makers of consumer goods would find some other way to wrap them. Better yet, maybe they could do without packaging at all and save everybody money and time.

Just why does a solid item like a smoke detector, for example, need a hard, plastic, transparent wrap that takes a major operation to get through? (hh)


8 responses to “Here’s something to ban: Hard plastic wraps”