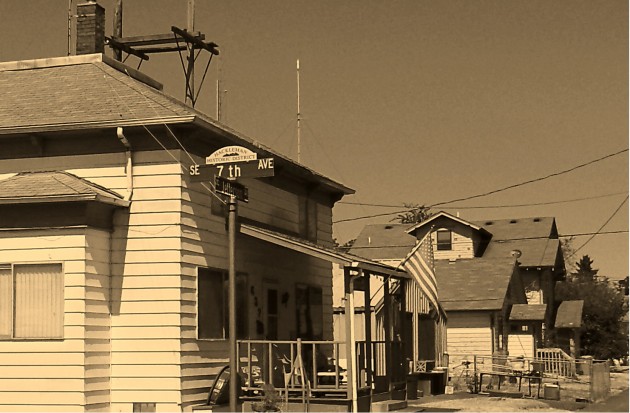 Street signs like this designate some intersections in Albany’s Hackleman Historic District.

Albany’s downtown renewal program hopes that loans of a few thousand dollars will encourage people to buy severely blighted houses dating from 1945 or earlier in the east-side historic district, spend at least $40,000 on renovations, and commit themselves to live there as owners. And if they wanted to renovate the exterior, they’d have to get the city’s landmarks commission’s OK. Sound enticing?

The majority of the Central Albany Revitalization Area’s advisory board thinks so. The board voted last week to reathorize a “Historic Homebuyer Loan Program” it had first agreed to launch in November 2013. It set aside $80,000 a year for the program, and board Chairman Rich Catlin said he hoped it would be in effect for at least five years.

The program is limited to the Hackleman Historic District east of Lyon Street and houses built there before 1946. The idea is to encourage renovation and home ownership in the district, where some old houses have been restored but many others need work or have been turned into apartments.

Under the program, buyers of delapidated houses, or houses they want to return to single-family residency, can apply for loans of up to 20 percent of the cost of renovations on projects costing at least $40,000. At that rate, the amount allocated would cover 10 applications for loans of $8,000 per year. The loan money could also be used to pay city fees.

Even though the CARA board approved it a year and a half ago, the program wasn’t ready to get started till now because of lack of staff time, the board was told. But now, urban renewal manager Kate Porsche has hired a young helper, Nathan Reid, who presented the program to the board last Wednesday. He now plans to tell real estate agents about the loan possibilities.

Mark Spence and other CARA board members expressed some degree of frustration about the slow progress of CARA activities. City Manager Wes Hare took the blame because he had added to Porsche’s job by making her the city’s economic development director as well. (hh)