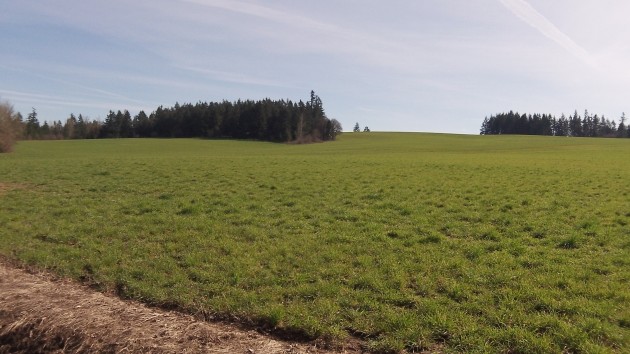 Open farm land — this view near Albany — is protected by state planning law.

A one-paragraph death notice in today’s Albany Democrat-Herald announced the passing at age 96 of Hector Macpherson, the one man who more than anyone else deserves the credit for saving much of the farm land and open space we still have in the more heavily populated parts of this state.

Although he would later leave the party — he would probably say it left him — he served one four-year term in the state Senate as a Republican from Linn County, from 1971 through 1974. As the owner of a 180-acre dairy farm in Oakville at a time of tremendous population growth in the Willamette Valley, he had been concerned for years about the loss of farm land to development. And in 1973, he was one of the prime architects of Senate Bill 100, the Land Conservation and Development Act, which laid the groundwork for the elaborate system of land use restrictions Oregon has developed and expanded ever since.

The system has a definite downside in that it limits and in extreme cases robs people of their property rights without compensation. (Critics regard it as a system of Soviet-style central planning without the gulag to enforce it. It has the Land Use Board of Appeals instead.)

But the system has done what it set out to do. It has made sure that with some exceptions, farm land outside the urban growth boundaries of cities cannot be turned into housing tracts or otherwise paved over. As a result, cities in much of the Willamette Valley south of the Portland metro area don’t run into each other. There is plenty of open space and farm land in between, and that’s a good thing not just for agriculture but for the livabiity of the valley as a whole.

Land use planning was not the only entry on Macpherson’s record of public service. He also supported Oregon’s first-in-the-nation bottle and bike bills in 1971, two other parts of the Republican leadership for livability during the era of Gov. Tom McCall.

Senate Bill 100, though, did not make Macpherson popular in his Linn County district, enabling Democrat John Powell to defeat him for re-election in 1974.

Macpherson had served in the Air Force during the Second World War, flying 50 bombing missions in Europe as a navigator and earning a Distinguished Flying Cross, and there were many other highlights and accomplishments in his long life. But he’ll be remembered mainly as the legislator who wanted to protect Oregon farms — and did. (hh)