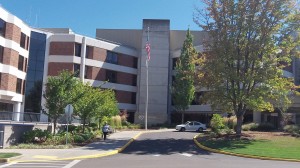 The imposing front of Good Sam in Corvallis.

If you’re worried by the price of medical care and the cost of insurance to get it, you will be interested in four Oregon citizen initiatives filed this month. The petitioners include at least a couple of leaders in the Service Employees International Union, Meg Niemi of Portland and Lawrence Arnbrister of Beaverton. Their proposals deal with what hospitals charge and what they pay their people.

And then there’s Initiative Proposal 39, which would limit executive compensation at nonprofit hospitals to 15 times what they pay their lowest-paid employee. So if such a hospital paid anyone the minimum wage in 2014, the president could not make more than $283,920. At Albany General, the chief executive’s total compensation in 2011, the last year for which figures are available online, was $398,546.

But executive compensation may be a small factor in the cost of care. Doctors may make considerably more. One doctor listed at Albany General made $553,398 in pay and benefits. Another made $518,677, and a third $442,945. Five others were not far behind. At Good Samaritan in Corvallis, the most highly paid medical doctor was listed as making $852,868. The next four made $764,077, $746,778, $622,936 and $611,665 respectively. No wonder some routine outpatient procedures — highly recommended by everybody in heath care — cost thousands of dollars, and no wonder the insurance to pay for them costs almost as much.

The hospital pay and price initiatives need at least 87,213 signatures each to make the ballot. If they do and voters pass them, it’s not clear how much of an effect they might have. Now that insurance is mandatory, there’s even less chance than before of forcing health care prices down if prices were widely publicized. Still, it would be nice to know what they are before you walk in. (hh)


2 responses to “Health care and pay: High and higher”