The little old house at 1930 17th Ave. S.W. (see below) has been razed to make way for expanding the Hazelwood Substation of Pacific Power.

To get away from never-ending post-election news, I made a point of going down Southwest 17th Avenue on Sunday to see how they were coming on expanding the Hazelwood Substation of Pacific Power. Turns out that the project is well under way.

As planned, the little old house at 1930 Seventeenth has been demolished to make room the the expansion.

Pacific Power bought the house in 2007, looking ahead to when the property would be needed for the substation. From the looks of the place when I saw it this July, the place was boarded up and had not been occupied for years.

Nevertheless, the Linn County assessor still says the house and lot together had a market value of about $130,000. The assessed value was much lower, about $83,000, and Pacific’s tax bill for the property this fall is nearly $1,700.

The Portland-based utility is spending about $4 million on expanding the substation in order to improve reliability of electric service in the Albany-Corvallis area, and to accommodate growth in demand.

Construction is expected to take about a year. The target for completion is December 2021.

I realize this may not be the most exciting development in these unsettled times. But on a cold Monday night in November, that’s what I have. (hh) 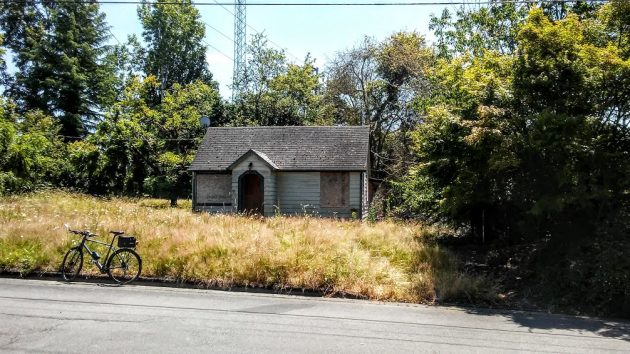 
One response to “Hazelwood project: It’s well under way”