Hard week ahead for CARA board 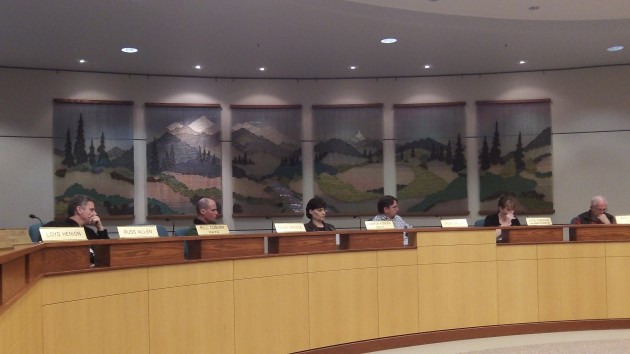 Part of the CARA board at a meeting last March. The board meets twice this coming week.

If you are not a member of the advisory board of the Central Albany Revitalization Area, be glad. The board faces a very tricky choice next week. If it attempts to support the city’s police and fire building projects with a big enough sum to make a difference — say $5 million or so — it would essentially gut the urban renewal plan it exists to carry out. If it sticks with the plan as written, it may doom the chances that those building projects will get the voters’ OK.

A year ago voters rejected a $20.3 million bond issue for those public safety buildings. Since then, the idea has sprung up to get CARA to help pay for the projects with urban renewal money, thus reducing the amount property owners would have to cough up to pay down a bond issue, assuming one is approved in May 2015. The idea came mainly from people who oppose, as an unwarranted give-away of public money, the CARA program of trying to improve and revive downtown.

Based on the law on urban renewal, the city staff and a consultant have concluded that CARA could possibly contribute up to about $710,000 to each of the police and fire projects with a minor amendment of the urban renewal plan. Contributing any more would require a lengthy public process and an election to change the plan, which did not include or contemplate police departments or fire stations when it was adopted in 2001.

So now, on Wednesday, the CARA board is scheduled to recommend whether and how much to support the public safety projects. It could decide to stick with the original downtown plan and let the police and fire buildings fend for themselves. And this would be reasonable considering how little difference the CARA money would make unless they practically throw out the original plan.

Then, on Thursday, the board meets again, this time to consider how to spend urban renewal funds on “public infrastructure” projects. CARA has the current capacity to borrow, on its own without an election, between $7.7 million and $11 million. Based on comments from 65 people at an open house, the top candidates for what the staff calls a “strategic investment in public infrastructure” are streetscape improvements downtown generally or on Water Avenue and the Dave Clark Path.

So this could be how this goes: On Wednesday CARA decides the police and fire buildings are none of its business, at least not in a major way, and the next night it recommends borrowing maybe $3 million or so to add landscaping, benches and decorative lighting to a few streets. If that’s what happens and people remember, you can imagine the reaction of many voters when faced with a request to borrow another $20 million or so next spring. “Never mind explanations about separate programs, different budget silos and legal requirements,” they’ll think. “If the city can pour that much borrowed money into making streets more attractive, those police and fire buldings must not be quite as important as they say.” (hh)


9 responses to “Hard week ahead for CARA board”