Hard to find: A volunteer for planning 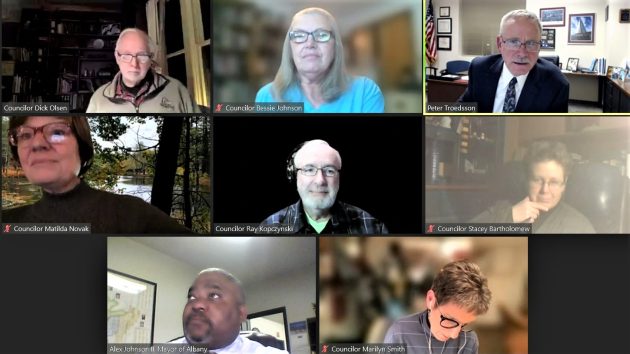 Councilman Ray Kopczynski, center, has not been able to find a volunteer for the planning commission from his ward. He’s shown during Monday’s council meeting on Zoom.

Finding a volunteer to serve on the Albany Planning Commission who lives in the city’s second ward has turned into a difficult challenge for Councilman Ray Kopczynski.

The councilor is obliged to nominate someone from Ward II to fill a vacancy on the commission. Back in October, he nominated Sharon Konopa, the former mayor, but the council turned her down.

Since then, he told the council Monday, he has been scouring Ward II for a possible replacement. He talked to six potential candidates, he said, Four told him no, and two said hell no, in his words.

He’s also contacted organizations including the chamber of commerce, without luck. Finally, he said, he found a willing body, but that person lives in Ward I.

The rub is that a city law requires council members to nominate planning commissioners from their own wards.

On Monday, the council talked about amending the law to allow nominations from outside a member’s ward if no one else can be found.

Councilwoman Bessie Johnson wondered about putting an ad in the paper. They tried that a few years ago, city staff member Matt Harrington said. The ad got only one response and wasn’t worth the cost, he recalled, whereas a Facebook announcement costing about $20 brought a response in double digits.

(He mentioned an astronomical sum as the cost of the ad, but it sounded implausibly high to me, so I’m not reporting it here; he may be remembering it wrong. And anyway, in the old days they could have had a little story in the paper, kind of like this one here, just by picking up the phone.)

The Albany Planning Commission is supposed to have nine members and is more than an advisory body. It decides on a range of land-use matters, including proposed subdivisions. The city code says the six councilors get to name one each from their own wards, and the mayor names three, one each from the three wards.

This is supposed to ensure geographic diversity in this commission, which acts kind of like a court in land-use matters.

If the balance among sections of the city is important, then loosening the ward requirement, as the council seems to be considering, would be tricky. It would have to spell out conditions under which councilors could nominate people from outside their wards. “I tried hard but couldn’t find anyone” might not be considered good enough.

Then again, the matter may resolve itself. Kopczynski says he learned after the meeting there may be a Ward II volunteer after all. (hh)


8 responses to “Hard to find: A volunteer for planning”