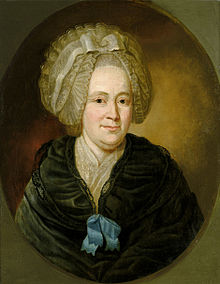 Mrs. Goethe had a sunny disposition and once wrote that she liked people very much, no matter who they were.

A friend emailed me a text that that may be helpful as 2012 comes to an end and we are forced, whether we like it or not, to start 2013. She quoted the “Recipe for a Happy Year” by Katharina Elisabeth Goethe. Here’s my attempt at a translation of these particular instructions:

Take 12 months, thoroughly scrub them of bitterness and envy, pedantry and fear. Divide each month into 30 or 31 parts, so that the supply suffices for one year. Each day will be made up of one part work and two parts cheerfulness and humor. Add three rounded tablespoons of optimism, along with a teaspoon of tolerance and a grain of irony, plus a pinch of tact. Then, pour an ample amount of love over the whole thing. The finished dish may be garnished with small sprigs of attentiveness, then cheerfully served every day along with a refreshing cup of tea.

The girl who became Mrs. Goethe was born in 1731 in Frankfurt on Main. She lived for 77 years and died in 1808. In between, she had four children including a son who became a world famous author. Now she’s been dead for more than 200 years. Her recipe is often ignored, just as she ignored February in her description of the months. But it still sounds like a pretty good way to live. Happy new year. (hh)

From Nancy Sturm: She was obviously a wise woman.  Not only is her recipe for a successful year spot on, she has left February off the calendar.  If only that had caught on.