Hanging out in center of a highway couplet 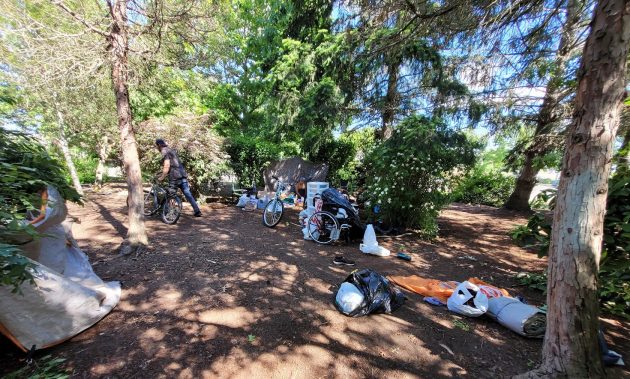 At the traffic island between Ninth, Pacific, Santiam and Geary on Wednesday afternoon, June 22.

Surrounded by heavy traffic in the middle of Albany, there are two islands of lawn, flowers, bushes and trees. Lately the larger of the two has become a place for apparently homeless people to hang out.

A reader called my attention to this on Tuesday. “They were there about a month ago,” she wrote, adding that she had sent a message to the city manager at the time “to please not have our nice landscaped couplet get trashed. The police got them out, but they came right back.”

The bike took me there for a look on Wednesday afternoon, and I found three people surrounded by stuff.

I asked a guy what they were doing there. “None of your business,” he said.

When I suggested to the man that camping was not allowed on this patch of state property, he replied they were not camping. “It’s day use,” he said.

These park-like islands between the roads — Pacific Boulevard, Santiam Highway, Ninth Avenue and Geary Street — are owned by the Oregon Department of Transportation. But the Albany Parks Department manages and maintains the landscaping in what has become a nice asset in the middle of the city’s busiest set of intersections, the east end of the highway couplet of U.S. 20 and Oregon 99E.

The city parks crew runs into issues with people camping in the middle of the couplet islands from time to time, I learned from Rick Barnett, parks and facilities maintenance manager.

He said the police work on moving the campers, and when that’s been done, “we will come in and clean up the site.” (hh) 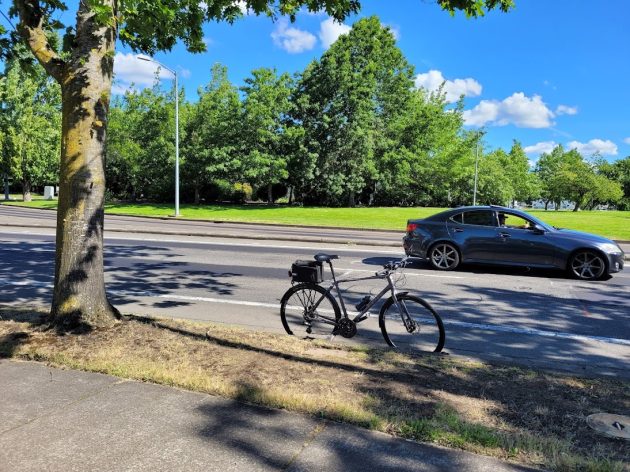 From Pacific Boulevard, the encampment under the trees on the trafffic island was impossible to see.


9 responses to “Hanging out in center of a highway couplet”