Hands off the property tax cap 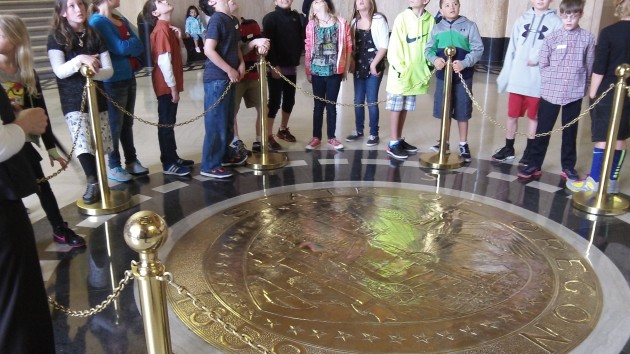 Visitors tour the Capitol, where the property tax limit my become a target in 2015.

The League of Oregon Cities plans to lobby the legislature next year for a constitutional amendment relaxing the limit on property taxes. Let’s hope lawmakers will resist the cities’ blandishments. Instead, they should give cities better tools to reduce their costs.

What troubles the league is the “compression” that results from voters approving more taxes than will fit under the constitutional cap for general government of $10 per $1,000 of assessed value. Now,  cities, counties and special districts sometimes get voters to approve levies in addition to their permanent tax rates. If those levies, added together, amount to more than $10 per thousand, the amounts billed to individual properties are reduced so that the owners don’t pay more than $10 per thousand. This compression of the tax rates means that the governments that levied the tax get less than the sum for which they had planned,

In a memo to city councils, the League of Oregon Cities said it “will continue to advocate for a constitutional amendment that gives local voters the opportunity to pass local option levies outside of compression. … This amendment would enable voters to determine the level of services they desire and the associated level of taxation,”

Nice try, guys. But no, this is not a good idea. First, because the tax limit is the only protection taxpayers have from the soaring rates that prompted the cap in the first place (via Measure 5 in 1990). And second, because property owners don’t necessarily have a vote in tax elections. (They don’t if they live elsewhere or if they’re a business.)

If tax elections were limited to people who pay the taxes, that would be one thing. But that’s not the case. In university towns, for example, students are urged to register and vote even though they never see a tax bill before they complete their studies and leave town.

There are other ways the legislature could help cities to meet their expenses, ways that don’t involve constitutional amendments requiring statewide elections. One is to reform the collective bargaining law that now allows outside arbitrators to decide — more or less arbitrarily, as the name implies — to force cities to pay public-safety employees more than they can afford. This happened to Albany, and now the fire department has to cut staffing even though voters approved a local levy.

The property tax system is a complicated mess. But for property owners, one thing that saves it from being a complete disaster is the limit on rates. Making it easier to exceed the limits would make the system even worse. (hh)

3 responses to “Hands off the property tax cap”