Gun bills: Surprise would be nice 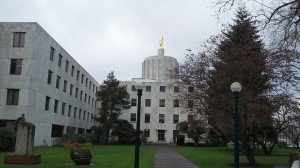 Gun bills are pending on the Senate side,

On Tuesday the state Senate Judiciary Committee is scheduled to act on — and will probably endorse — four bills related to guns. Only one of them makes some kind of sense. It would bar people from carrying firearms in the Capitol building but makes an exception for people with concealed handgun licenses who keep their pistols hidden.

The bill was introduced after a few young men armed with rifles strolled the hallways a few weeks ago. That was stupid. Only an idiot carries a rifle into the legislative building to show off and make some kind of point. Those guys should have been summarily disarmed and thrown out.

Two other bills are aimed at concealed-carry license holders, as though these citizens had ever caused any problem. They haven’t, and there’s no reason to threaten them with prison or fines for carrying in a school, or to require license applicants to take a expensive and time-consuming live-fire test, as the bills would do.

Likewise, there’s no compelling practical reason for requiring a criminal-records check if you sell or give a gun to someone at other than a gun show. This change would not affect criminals but inconvenience anybody else, even though the bill is not nearly as restrictive as one passed in Colorado. (The Oregon bill requires no paperwork if you just lend a gun to someone.

Turning down those bills would cause no harm, but if the committee does so, it will be a big and welcome surprise. (hh)