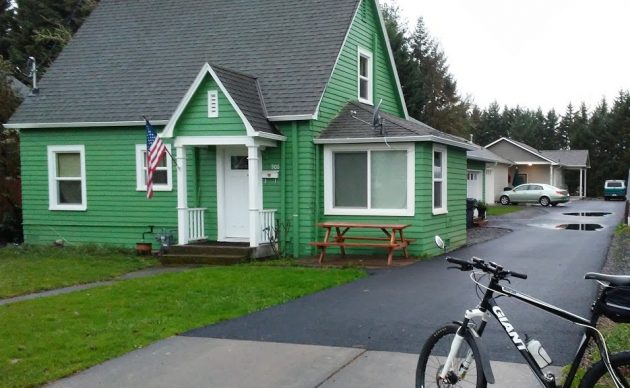 Here, in back, is a detached ADU permitted by the city in line with state law, if not the city code.

Whether it wants to or not, the Albany City Council will once again have to confront the issue of accessory dwelling units or ADUs. That’s because the city is being threatened with legal action over the outdated ADU language in its development code.

Wednesday’s council agenda includes a letter from 1000 Friends of Oregon, a private organization based in Portland that thinks of itself as a guardian of Oregon land use laws. It says it will petition the state Land Conservation and Development Commission for an enforcement order unless Albany gets its code in line with state law.

In 2017 and ’19, the legislature passed laws forcing cities of Albany’s size to allow detached ADUs on all residential lots where they fit, and to do so without restrictions on ownership of those units, or requiring additional parking. Albany’s code apparently does not allow detached units. It also adds parking requirements and says either the primary dwelling or ADU must be owner-occupied.

Twice the council has tried to pass ordinances to fix those departures from state law. But both times a council majority of four also wanted to allow ADUs of up to 900 square feet. Mayor Sharon Konopa vetoed those ordinances because she wants ADUs no bigger than 750 square feet as allowed by the current code.

The state statute doesn’t say anything about the size, but the lack of a new ordinance to amend the code on the items that matter has left the city out of compliance — on paper, if not in practice.

On the advice of City Attorney Sean Kidd, the Community Development Department has issued permits for ADUs as required by the state law, ignoring the city code provisions to the contrary. (At least two detached ADUs have been built, one on Broadway Street and the other on Fifth Avenue.)

Presumably the state land use commission could order the city to amend its code. Or the council could amend the code on its own by not touching the contentious issue of size at all.

Maybe the council could quickly pass an ordinance amending the development code that simply says: “Accessory dwelling units are allowed wherever Oregon law says they are, and any provisions in this code to the contrary are repealed.” Hard to see how the mayor could veto a change like that. (hh)


9 responses to “Guess what: ADUs on Albany agenda again”