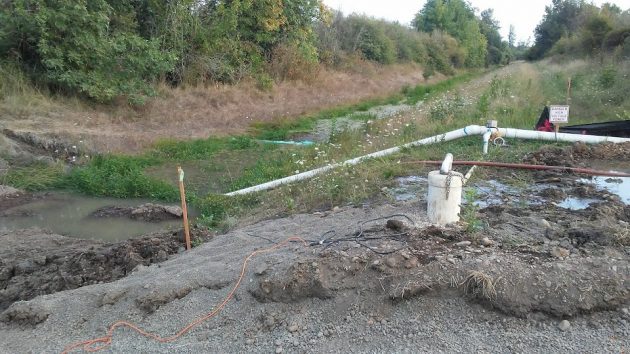 One of the 12 wells pumping groundwater into an overflow channel at the Santa Maria Avenue project.

Temporary wells are pumping water out of the ground at a street construction site near Albany’s Draperville neighborhood, and at least one resident there is worried this may lower the water table so her own well will no longer work. The city engineer says the risk of that happening is “very low.”

I heard from a resident of Charlotte Street N.E. a few days ago. “My well and many others in this area are only 30 feet deep,” she wrote. “I have grave concerns that I would end up losing my well because they are pumping all the aquifer off. How can this be legal?”

A contractor for the city is building a 650-foot extension of Santa Maria Avenue, between Draperville and the new Somerset subdivision. The project includes storm drains and a sewer line, which require deep excavations. The water table in that area east of I-5 is high, and to keep it from flooding the trenches, a subcontractor got a permit from the state to install 12 temporary “dewatering” wells to a depth of 30 feet.

The wells run all the time, as I confirmed when I looked at the construction site after hours on Wednesday night. (I had gone there Tuesday too, but the foreman understandably didn’t want a stranger underfoot and suggested I come back after the workers and heavy machinery were done for the day.)

A system of pipes and hoses dumps the water into an overflow channel, normally dry in the summer, that runs between Truax Creek to the north and Burkhart Creek to the south. Building a bridge across the channel is part of the street contract.

So far, the resident who contacted me said she had not noticed any difference in the production of her well. “I don’t do any yard watering through the summer at all for fear of running out of water,” she wrote on Wednesday. “I have noticed the water pressure somewhat different and my pump, which is only three years old, has been kicking on and sounds a little funny when it runs now.”

Told of the concern, City Engineer Staci Belcastro said the state permit for the temporary wells includes a provision requiring applicants to acknowledge they have to stop using water to allow senior water-right holders “to get water to which they are entitled.”

Belcastro referred me to the state Water Resources Department, “but it seems that the risk to the water supply in this case is very low.”

When I visited the site Tuesday, it looked as though the contractor was refilling the main trench, so the need for dewatering the excavation may be over. In any case, the city’s $1,851,622 contract for the Santa Maria extension with Kodiak Pacific, of Tualatin, calls for the construction to be complete by Dec. 13. (hh) 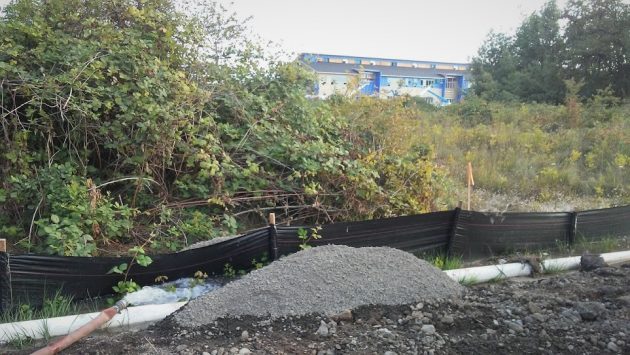 Groundwater spills from a hose on Aug. 7. In the background: Meadow Ridge School under construction.