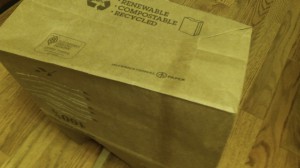 The underside of a bag from Ray’s shows who made it.

In the great plastic-bag debate, one supermarket chain is following the right approach. It is making a change as a business decision, without asking the state or local government to cover its back by passing a law.

The change was announced by C&K Market, a company based in Brookings which has grocery supermarkets in North Albany, on the Oregon coast, in Southern Oregon and California. Starting Jan. 14, the company said, it would no longer put most groceries in plastic bags. Instead, it will offer paper bags only and also sell 99-cent bags that can be reused many times.

Also in sharp contrast to stores in Corvallis, Portland and other cities where plastic-bag bans have taken effect, C&K stores, which include Ray’s Food Place outlets, are not charging a nickel for paper bags, avoiding a likely annoyance to many customers. Instead, they will give customers a nickel discount for every reusable bag they bring with them to carry their groceries away. That’s the way to handle this: No heavy-handed coercion by the government, no threats of fines from the plastic police. No sticks, just carrots.

For Albany-area customers of Ray’s, there’s only one downside to all this. The paper bags, though very handy for lots of things after you get them home, are made by International Paper. The bags thus remind you of the company that bought the Albany Paper Mill a few years ago and then shut it down, refusing to make it available for anyone else and killing about 200 well-paying jobs, an action whose ripple effects dealt a heavy blow to the city of Millersburg and the entire mid-valley economy. I’ve heard one customer at the checkout stand say he’ll take plastic because he won’t use an IP bag. He may not be the only one around here who feels that way. (hh)

From Rhea Graham: (Subject: Paper bags and International Paper) Oregon legalized growing industrial hemp a few years ago.  Let’s get the DEA educated to the easily identifiable and distinct differences between the cultivation of cannabis and hemp and get hemp growing in this “Grass Seed Capital of the World.” We could put thousands of people to work, not only in the growing and processing – but it leads to so much more!  Fiber, rope, paper, compost-able plastic, hempcrete and more can be made from the hemp plant, employing THOUSANDS!  They have a job … have money to spend and it goes around and around in our local economy.The hemp plant really will save our country, if we allow it to.  Please encourage others to learn more!