Gov’s ‘stay-home’ order has some teeth 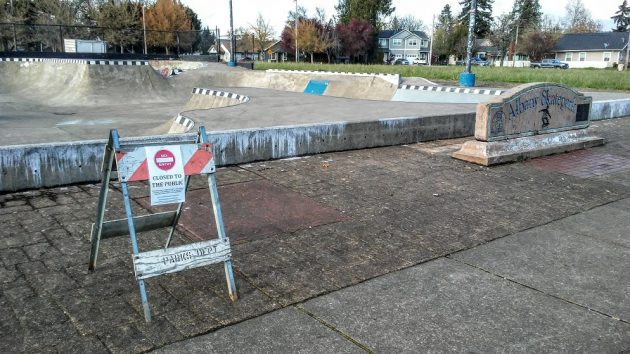 There was nobody at the Albany Skatepark near Hackleman Park on Monday afternoon.

Even skateparks such as Albany’s had to close Monday under Gov. Kate Brown’s order to “stay home, save lives.”

Lots of other places including government buildings and many businesses had to close to the public as well, and so did play areas in public and private parks.

In Albany, before Brown’s order, officials had previously canceled the scheduled Wednesday meeting of the city council. All agenda items for Wednesday were moved to April 8, assuming the shutdown of events is over by then.

The news, in print and on the air, has been full of summaries of the governor’s latest order. But if you want to know the details, exactly, you had better go through all eight pages of it yourself. You can read the executive order here.

There’s a long list of businesses that are banned from operating starting March 24 on the grounds that they’re the kind where “close personal contact is difficult or impossible to avoid.” Some items on the list, like barber shops and hair salons, are obvious. But museums? In most local museums around the state, including Albany’s, visitors are usually wandering around by themselves.

The governor has been issuing orders to try to control the new-coronavirus outbreak since March 8. One question: The motive is  admirable, but where does she get the legal authority to order people about in this way? The answer is in Chapters 401 and 403 of the Oregon Revised Statutes. The latest order lists all the applicable laws, and you can look them up.

This order, No. 20-12, also spells out the possible penalties for failing to comply. Doing so is a Class C misdemeanor, which is punishable by up to 30 days in jail and a $1,250 fine, or both.

Don’t expect anybody to be charged, let alone convicted and fined, for being in a prohibited space or getting within 4 or 5 feet of a stranger in public.

But in case somebody enters the skate park or uses the swings in somewhere else, the law is there just in case. (hh) 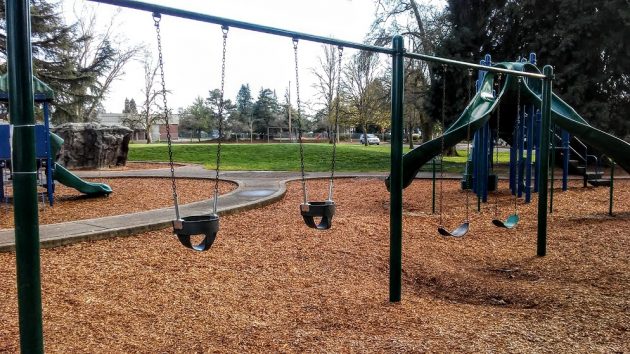 Even between showers Monday, no one was using the swing set at Takena Park.


38 responses to “Gov’s ‘stay-home’ order has some teeth”