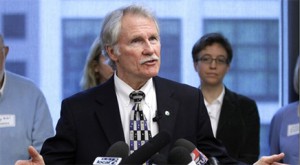 Gov. Kitzhaber, here in a photo on his official website, is taking a principled stand — haflway.

If the Oregon Supreme Court agrees with Gary Haugen, the death row inmate convicted twice of murder, Governor Kitzhaber will have a choice to make: Let Haugen’s execution go ahead, or refuse again.

Haugen wants to be executed, he says, to demonstrate problems with the death penalty. That seems like a weird way of showing your opposition to capital punishment. The governor issued him a reprieve, which Haugen did not want and challenged in court. Last week the Supreme Court heard the case. Kitzhaber has told Oregon Public Broadcasting that even if the court decides against the governor’s grant of clemency, he will block the execution by refusing to give the final go-ahead, as is customary, minutes before the needle goes in.

Kitzhaber deserves respect for refusing to do something he believes is wrong, but he’s being too timid in this principled stand. He could make a stronger point by granting clemency to all 37 inmates on death row, thus immediately saving a vast amount of time and public money now consumed in appeals. But indulging your moral convictions comes with a price. A public official faced with enforcing a law be believes is unjust has only one honorable choice. That is to resign. (hh)