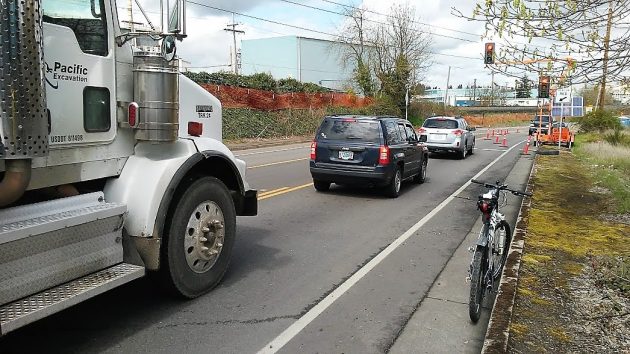 Traffic waits for a green light Friday at the Truax Creek Bridge on Old Salem Road.

The good news is that traffic delays because of bridge construction on Old Salem Road in Millersburg will end sooner than expected.

Last October, Linn County awarded a $1,054,292 contract to replace the bridge across Truax Creek on Old Salem Road to the Stayton construction company HP Civil Inc., which had submitted the lowest of seven bids. The construction made it necessary to close one lane of Old Salem, the two-lane main road between Albany and Millersburg. Signals have regulated the traffic since. Road signs warn drivers of delays of up to 15 minutes.

The contract gives the contractor until Nov. 2, 2018, to finish the job. But County Engineer Chuck Knoll in the Linn County Road Department told me Friday that the job was ahead of schedule and the contractor expects to be out of there by the first of August.

Knoll said the project was going well and the county was pleased with the contractor’s progress.

I wondered whether the traffic delays because of the temporary signal had been much of a bother in Millersburg. Not really, according to City Manager Kevin Kreitman. Many commuters have been using the freeway instead. (hh) 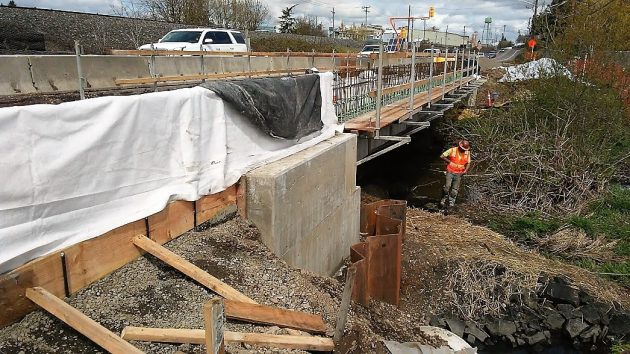 The new eastern lane of the bridge is just about finished.

One response to “Good progress on Truax Creek Bridge”