Good news on the crime front 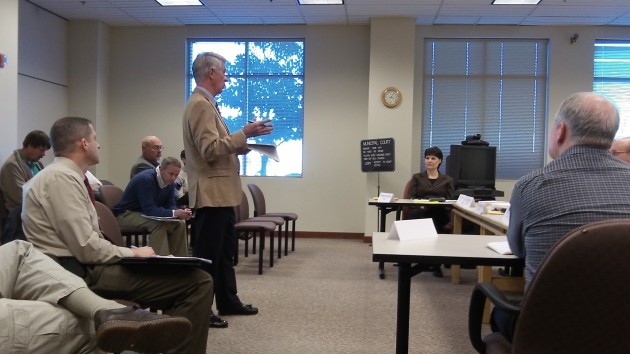 Judge Robert Scott, standing, reports to the council Monday as Police Chief Mario Lattanzio, seated at left, and others listen.

Here is good news — unless you’re a crook or frequent violator of traffic laws, that is. Two recent reports to the Albany City Council show that crime is way down and the number of prosecutions in city court is up. It sounds like there’s a connection, even if it’s indirect.

On Feb. 9 Police Chief Mario Lattanzio gave the council an update on crime. In short, so-called Part 1 crimes in 2013 were down 8.9 percent from 2012, and in 2014 they were down another 17.4 percent. Violent crime was mostly unchanged, and far below state and national averages. But property crime, while still above average, dropped from 46 to 34 per thousand inhabitants over two years.

On Monday, Municipal Court Judge Robert Scott presented his annual report. It showed a 29 percent increase in “criminal nontraffic” cases in the city court, from 1,094 in 2012 to 1,400 in 2014. If there’s a connection, it’s not direct.

The decline reported by Lattanzio was in the most serious kinds of crimes. On the personal side they are homicide, rape, robbery and aggravated assault. On the property side they are arson, burglary, theft and vehicle theft. If the criminals in those cases are caught, they are typically prosecuted in state court, and municipal court is not involved.

Still, the connection may be this: Overall, the city court caseload jumped from 3,762 in 2012 to 6,053 in 2014. The biggest two-year increase, 84 percent, was in traffic violations. Said Scott: “I believe that the increase in the number of cases filed over the past two years is essentially due to what I perceive as an increase in the presence of Albany police officers throughout the city.”

This increased “presence,” presumably meaning a more targeted pattern of patrolling and general law enforcement, would be expected to result in a greater number of citations to municipal court. But it would also have the likely side effect of deterring crime of a more serious and harmful sort.

Lattanzio, in his second year on the job, says the spectacular reduction in serious crime since 2012 will be hard to repeat. But by their actions — including stepping up patrols and getting the council to pass an ordinance making it harder to sell stolen goods — the chief and his department have put Albany on the right track. (hh)