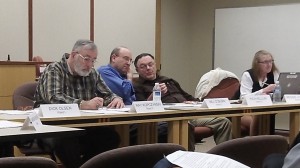 Part of the Albany council at work on Monday, during a work session.

There’s good news for customers of the Albany city water system, assuming that voters don’t erase part of it with the initiative election that ends March 12.

The good news: Last year, when the price of water was raised 3 percent, Albany’s public works department projected the price would have to rise 4 percent in 2013 in order to keep up with expenses. On Monday (Jan. 27) Public Works Director Mark Shepard was able to tell the city council that only a 2 percent hike, half of what was projected, would be required this year. That’s because, he said, the department paid careful attention to controlling costs, and even with the smaller increase, the city could still meet debt service payments and meet the annual target of spending $1.25 million on repairs and capital projects.

The debt service is on a $40 million revenue bond the city sold about 10 years ago to finance a new water treatment plant and other work. Now, because of low interest rates, the city plans to refinance that debt, and if that’s successful, it would save about $150,000 a year, which could be used to hold future annual water rate hikes below the percentages now projected to be necessary.

The refinancing assumes that Albany voters reject the pending debt limit initiative, or that the ban of “new debt” without voter approval does not apply to refinancing. It’s hard to say exactly what “new debt” means. Normally, if the city issues a debt instrument it did not have before, the plain language says it would be “new” even if it replaces a former debt. So depending on what the courts eventually say if the ballot measure passes, and whether the measure can truly limit debt retroactively to last Feb. 28 as it purports to do, approval of the debt limit might prevent the refinancing that would save ratepapers money. Surely that’s not what the proponents of this initiative had in mind. (hh)