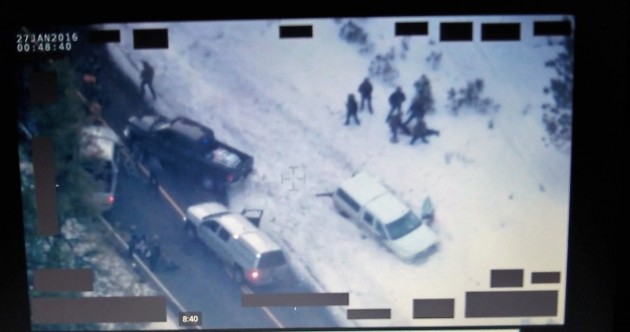 FBI video: Law officers gather around the body of the dead rancher after others in the white truck have come out.

The FBI on Thursday told us what happened when several of the Malheur refuge protesters were arrested and one was killed. It demonstrated that informing the public is the right thing to do, and that it can be done in a timely manner even while a formal investigation is still going on.

This change from the usual stance — “we can’t talk about it because of the pending investigation” — was prompted by the blizzard of wild stories making the rounds on social media. The FBI’s Greg Bretzing made this clear when he said, at a press conference in Burns, “We know there are various versions of what occurred during this event: most inaccurate, some inflammatory. To that end, we want to do what we can to lay out an honest and unfiltered view of what happened and how it happened.”

By now everyone who is interested has seen the FBI’s aerial footage of the events on the snow-lined Burns-John Day Highway on Tuesday afternoon. It’s available on YouTube if you’ve missed it. It shows rancher LaVoy Finicum driving away from officers, steering into a snow bank when his truck reaches a roadblock, getting out of the truck, walking into the snow with his arms up and then apparently reaching into the left inside of his coat with his right arm. That’s when he goes down.

Bretzing said Oregon State Police troopers shot him, and a loaded 9-mm pistol was found in his jacket pocket. The state police followed up with an email quoting their policy on when deadly force is justified. It is when an officer reasonably believes it is necessary to defend the officer or others from serious physical harm. On the video we cannot hear what anyone said.

There may still be questions, such as why anyone including some media called this a “traffic stop,” when it was clearly a big-time planned operation complete with aerial coverage to capture these people. And it would be interesting to know whether the officers on the ground had body cameras that captured the action in more detail than was shown in that fuzzy video from the air.

But Bretzing’s briefing Thursday, and making the video widely available, was a welcome departure from standard procedure, which is to disclose as little as possible for a long as possible, allowing rumors to fly and the public to stumble around in the dark. (hh)