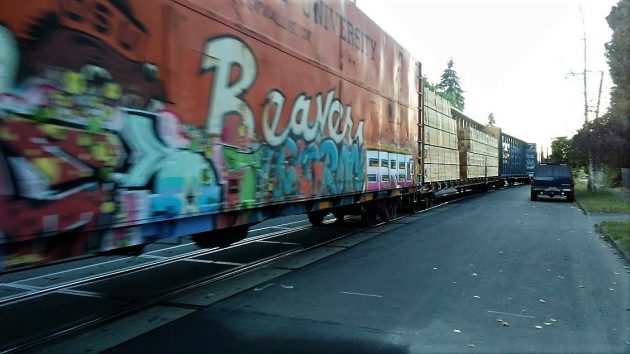 From time to time I’ve wondered about the speed that the Portland & Western’s freight trains maintain on the line down the middle of Albany’s Water Avenue. Now, based on some fortuitous data gathering, I have a pretty good idea.

It so happened that at dusk on Saturday night, after the heat of the day had gone down, the bike and I neared the end of a little ride through town. In the Willamette Neighborhood, we and a PNWR freight hit Water Avenue at just about the same time.

More or less, the bike and I matched the speed of the train. And as you can see in the video below, the computer on the handlebar told me that we were both going between 10 and 12 miles an hour. The train’s speed was steady, closer to 10 mph, and mine varied a bit.

You may hear me saying this was an empty train, but this applied only to the cars in front. When I stopped and let the tail end go by me, I saw cars loaded with lumber too.

The track goes down the center of the street for seven blocks, and to the west there are several unprotected grade crossings including the entrance to the Albany Senior Center and Monteith Riverpark. So there’s ample reason for trains on that line to go as slow as they do, even at a quarter to nine on Saturday night. (hh)