GMO dilemma: How to vote? 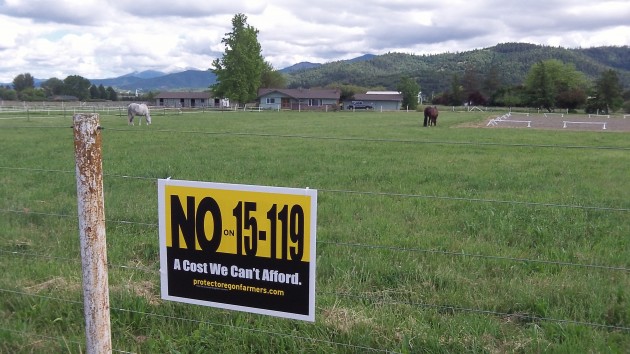 That’s one side of the issue … 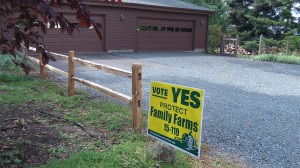 … and this is the other. But there’s obviously more to it than signs.

I’m glad I don’t get to vote in Southern Oregon’s Jackson County even though I use its roads to ride my bike. I would have a hard time making up my mind about the citizen initiative that would ban the growing of GMO crops, meaning genetically engineered or modified organisms.

The proponents claim to be protecting family farms. The opponents make the same claim. One side or the other will claim victory when the primary election ballots are counted on May 20.

The proponents  of Measure 15-119 include organic farmers and, judging by the “yes” signs in a suburban section of Medford, a good number of people with gardens in their yards. Reading their campaign material online, the one charge that sounds plausible to me is that banning GMO crops is the only way for non-GMO crops to be protected from contamination. If your business depends on selling organic produce, having some GMO pollen waft over your fields in a springtime breeze could probably wipe you out.

You may remember when Oregon wheat was blocked from being exported to Asia for a while because somebody discovered a genetically modified variety in an Eastern Oregon field. Another instance: Canola or rapeseed is banned in part of the Willamette Valley because its pollen might affect similar plants nearby. So genetic contamination is a real concern.

Backers of the initiative also worry that if, through no fault of their own and in fact against their wishes, their crops come to have a patented gene, they might be subject to legal action by the corporation that owns the patent. Or at least they could not, without violating a patent, use part of their harvest to plant next year’s crop.

So the initiative backers have legitimate points.

The opponents do too. They point to details in the proposed ordinance that could be used to drive commercial farms out of business. One provision that struck me as particularly odious is that individuals or groups could enforce the ban by bringing suit, but the ordinance would not allow winning parties to get judgments to recover the cost of litigation. GMO opponents organized as interest groups funded by donations could sue every grower in sight on suspicion that they harbor banned plants. The farmers would bear potentially ruinous costs, but even if they win they lose a lot of money and perhaps their farms. This is unfair and should not be allowed.

The legislature last year banned local jurisdictions from regulating GMO crops. It made an exception for Jackson County because the initiative was already being circulated. That exception was a mistake. As with canola, this issue belongs in the legislature, where committees and interest groups can try to work things out so that everybody’s legitimate interests are protected and nobody gets hurt. (hh)