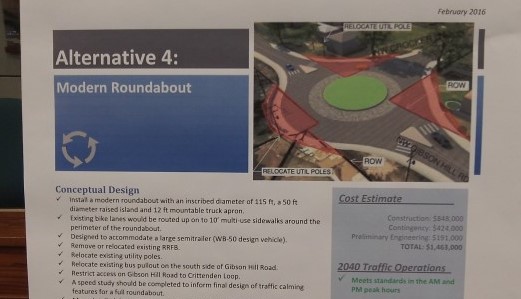 This 2016 graphic illustrates the Gibson Hill/Crocker roundabout plan. Property that would have to be acquired is shown in red.

A plan to build a big roundabout at Gibson Hill Road and Crocker Lane in North Albany has lost a supporter on the city council, and a majority now would like to see a less expensive solution.

The issue came up in a council work session Monday when the staff was explaining changes in a long list of Albany street projects to be funded partly or entirely with systems development fees levied on all new construction. In the long-range plan, doing something at Gibson Hill and Crocker had been listed as costing $345,000, and the revised list puts the cost at $1.2 million. (The estimate last year was $1.4 million.)

A year ago, after an extensive sampling of public opinion, the council voted 4-3 to go for the roundabout to handle future traffic loads at this T-junction, saying it might be built in five years and in the meantime the city should work on property acquisition and design.

But Monday, Councilman Mike Sykes, new on the council this year, questioned why the city would build a roundabout at three times the likely cost of traffic signals. Sykes was elected to succeed Floyd Collins, who had advocated and voted for the roundabout in May 2016.

Also voting for the roundabout a year ago was Councilman Bill Coburn. But on Monday he spoke of maybe going for a smaller project that would cost less.

Transportation analyst Ron Irish told the council that property owners on the corners of the intersection were opposed to giving up any of their yards for the project. And Councilwoman Bessie Johnson, who voted against the roundabout a year ago, said Monday she did not want to take people’s property.

Councilman Rich Kellum voted against the roundabout in 2016 and reiterated that position Monday. Dick Olsen also voted against it. He gave no indication he had changed his mind.

Actual construction of any project at the intersection is years away. But as of now, there are at least four votes for a treatment less expensive than a full-blown roundabout.

Despite the Monday discussion, on Wednesday the council voted to adopt the list of potential street projects, with Kellum voting no. He objects to shifting future funding from some east-side projects to the west side. But the list is mostly — to use a faddish adjective — aspirational. It contains scores of projects totaling an estimated cost of $268 million, most of which no one living today will ever see built.

Meanwhile, more houses are going up off Crocker Lane, the northern third of which will be rebuilt this year, which means the line of cars waiting to make a left on Gibson Hill in the mornings is likely to keep getting longer for a while. (hh)