Getting rid of junk: It’s not easy or quick 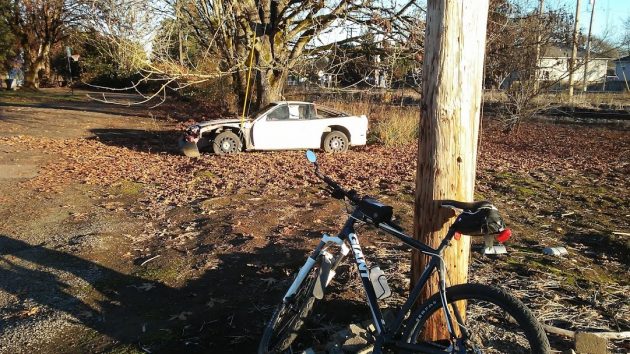 The wrecked car remained on the vacant lot at Second and Chicago Street on Dec. 4.

It seems to be hard to keep Albany free of junk and trash, especially stuff like this wrecked car, which has been sitting on a vacant lot at 215 Chicago St. S.E.

A city ordinance declares wrecked cars to be junk and, as such, a nuisance. It also says property owners who keep junk outdoors can be cited. Then, if they get rid of the junk, the citation will be dismissed. A second 30 days may be allowed if there are “special circumstances.”

The trouble here is that the vacant lot belongs to the BNSF railroad company, which has leased its tracks in the vicinity to the Portland & Western. In fact the car bears a paper note — torn and barely readable after being out in the weather — from someone at P&W giving notice that he’ll have the wreck towed away in 72 hours.

That was, if I correctly deciphered the date, on Oct. 26, and obviously the tow had not happened when I went by there again on Dec. 4.

A community service officer with the Albany police talked to the railroad company recently, Code Compliance Officer Kris Schendel told me in an email Thursday, “and they stated that they are working on getting it removed.”

But here’s the thing. Railroads across the country own lots of land along their tracks that is mostly unfenced and untended. If they were quick to cart away anything that people left on their property — from household trash to old mattresses and wrecked cars — they wouldn’t have time to run their railroads. They’d be running a trash pick-up and disposal service instead and probably go broke in the process.

Citing the railroad wouldn’t make any sense. The P&W didn’t dump that old Nissan there. Why should they have to answer for it in court?

The railroads are in the same position as governments and agencies that own lots of unprotected public lands. The federal land agencies, for example, mainly the Forest Service and the BLM, for years have had to cope with the ugly results of people using our public lands as dumps.

The solution? If you can think of one, let me know. (hh) 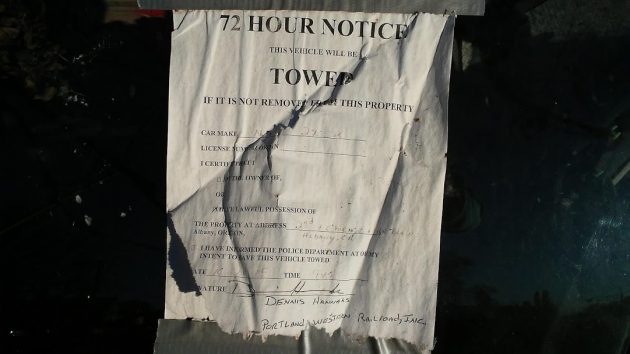 Towed in 72 hours? Would be nice if that was a possibility.


11 responses to “Getting rid of junk: It’s not easy or quick”