Getting away from it all: Try this lake 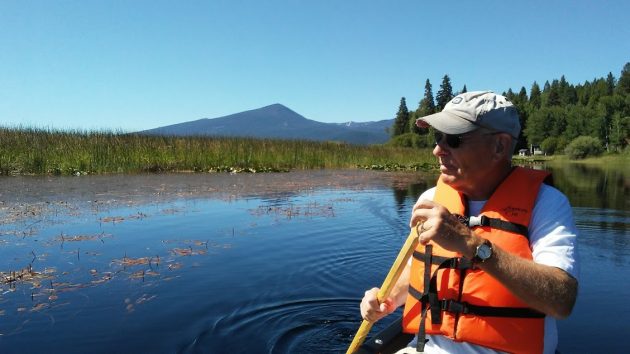 Taking a day off the bike to sample the great Oregon outdoors on the water.

What can I say? Leaving Albany briefly behind, I took to the wilds of Upper Klamath Lake with my son Dave. And I can report that the canoe trail there provides an experience that is hard to beat.

If you like nature, that is. Birds, for example, all kinds of birds from pelicans and eagles to swift little flyers whose names I don’t know.

But also beavers and their lodges, and ducks flapping their way out of the reeds when they hear you coming, and fish jumping out of the lake or just poking up their heads. The place is a wildlife refuge, and it certainly shows.

From the lake, the surrounding mountains of the southern Cascades seem incredibly far off, even though the actual distance is not that great. Also on the horizon: the ragged rim of Crater Lake.

We were on something called the Upper Klamath Canoe Trail. Online I read that it’s 9.5 miles long with four  branches. If you follow the trail, you see discreet little wooden signs pointing the way. And if you veer off it, as we did, you best know your bearings to find it again. Or rely on some digital gadget to remind you where you are.

The Rocky Point boat launch off the West Side Road is a good place to start. If it’s a nice day, though, better get there early because there are only about half a dozen parking spaces for vehicles and boat trailers.

There’s a 10 mph, no-wake limit on the trail. We made about two or three miles an hour, not counting the time we stowed the paddles and sat still for lunch, slowly drifting in the breeze in this outstanding part of Oregon’s great outdoors. (hh)

It helps the commentator (below) to have a strong paddler in the bow (above).


5 responses to “Getting away from it all: Try this lake”