Get out of the way, but how? 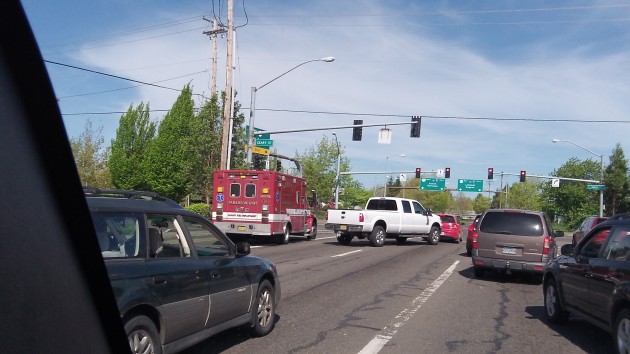 An Albany Fire and Rescue ambulance finally gets through traffic at Ninth and Geary Monday.

Most afternoons, around 4 and 5 p.m., Albany’s Pacific-Ninth one-way couplet is a busy place, traffic plugging all available lanes, backing up at lights. And when you hear sirens and see the flashing lights, what you’re supposed to do to let the emergency vehicles through is impossible and may actually hold them up.

What you’re supposed to do is pull to the right and stop. That’s what the Oregon Driver Manual says. The manual says nothing about what to do when you can’t go anywhere because you’e boxed in and the light ahead is red. I don’t know how often this happens, but I’ve seen it a few times over the years. The latest was on Monday afternoon.

Here’s what the manual says: “When you see or hear an emergency vehicle warning, you must immediately drive as close as is safely practical to the right-hand edge or curb of the road, clear of any intersection, and STOP. Stay stopped until the emergency vehicle has passed or until a police officer tells you to move.”

Waiting for the fire engine or ambulance to pass is hard to do when the rig with the flashing lights is stuck behind you and can’t move at all. As for pulling to the right, that’s risky when you’re in the left or middle lanes and the lanes to your right are full.

The smart thing, I would think, is for drivers in the left lanes to pull to the left if they can, for drivers on the right side of the road to pull right if possible, thereby opening a lane in the middle for the emergency rigs to squeeze through. For that to work, though, drivers up and down the line have to use their heads and all do the correct thing. If just one screws up and dodges left instead of right, or vice versa, we’re as bad off as before, and somewhere in town somebody may be hoping for an ambulance before he bleeds out.

I know we can’t live without rules, and the advice in the driver manual is probably based on some section of the Oregon Revised Statutes and therefore has the effect of law. But I wish the official instructions in the manual could say something like this: “When you hear sirens or see emergency vehicles, do your best to get out of their way any way you can without running into anybody else.” (hh)