Get ethanol out of our gas 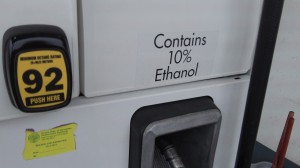 Now they tell us  – about the drawbacks and unforeseen consequences of all that ethanol in our fuel.

For years federal and state policy makers and legislators promoted ethanol as the way to cleaner fuel and a greener future. Even though ethanol in this country is made from corn, and the increased demand drives up the price of food. Even though small engines and older vehicles were being damaged by this form of fuel.

Now the downside of all that ethanol production is becoming evident even to the national media. The Associated Press reported on Nov. 12 that the ethanol requirement, because of the need for more acreage and more fertilizer to grow corn, has helped ruin parts of the countryside and polluted some of the water supplies in the Midwest. The story also recognized that the production of ethanol requires a large amount of energy from burning oil or coal, calling into question whether it actually saves fossil fuels or reduces the amount of carbon dioxide that our civilization frees up or creates.

Even the federal EPA, according to the AP, is considering reducing the amount of ethanol that is required to be added to the gasoline supply. In Oregon, state law has mandated 10 percent ethanol in gasoline for years. In light of the new recognition of all the harm done in the production of this fuel, this state requirement should be repealed. (hh)


One response to “Get ethanol out of our gas”