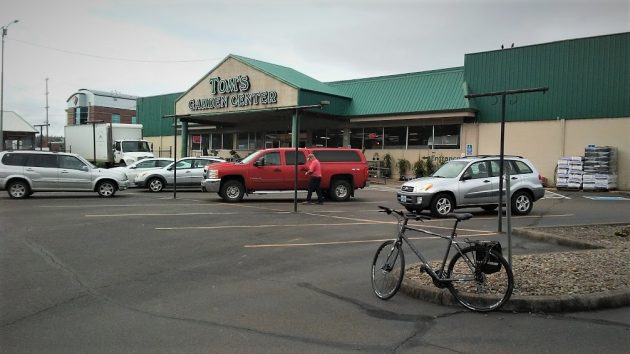 Since 2005, Tom’s Garden Center is just about the first thing drivers see as they enter North Albany via the Lyon Street bridge, especially at night when the big neon sign is lit. Starting no later than July 31, we will see it no more. (See the update below.)

A reader asked me Monday: What’s the story on Tom’s? He understood there had been an ownership change and wondered whether the business would continue as a garden center. On Tuesday I pedaled across the river to find out.

Turns out that yes, Tom and Annette Krupicka sold the property to an investment group, LT Investments Three LLC, which has an office on Kings Boulevard in Corvallis. Benton County tax records also list an owner named Richard Cassar, with the same address. The county records say the sale, for $1.6 million, took place on Jan. 4.

The property measures slightly more than 2.5 acres. Its market value on the tax records is listed as $2.5 million, and it’s assessed at just over $1 million. The property taxes last year totaled $19,838.

I got a chance to chat with the Krupickas Tuesday as they were working in the store. They’ve owned and operated Tom’s in Albany for 30 years this May, first at a site between Pacific Boulevard and the Southern Pacific tracks, and since 2005 at the North Albany location, 350 Hickory St. N.W.

Why quit now? Tom told me they’ll miss their customers, but after some 40 years in the garden-center industry they are tired. They plan to retire in Tillamook, where they have a home and have lived since 2010, commuting to Albany several times a week.

They’ll run the store as normal until the end of May. By July 31 they have to be out.

The 14,000-square foot building was a grocery store, Carter’s Market, in the 1970s and ’80s, and later under different owners until it closed. When the Krupickas acquired the property, one of the first things they did was to landscape and beautify the formerly barren grounds up to the highway.

What will happen to the property is uncertain, but it probably won’t be a garden center. Tom told me the new owners initially had thought of building self-storage units but now are looking for a tenant for the building. We’ll see whether the new operation, whatever it is, can duplicate the welcoming nighttime neon glow that has greeted North Albany residents on their way home for the last 14 years. (hh)

A update on this story: I just had an email from someone saying they had secured a lease on the property and intend to continue it as a garden center. More details when I have confirmed them. 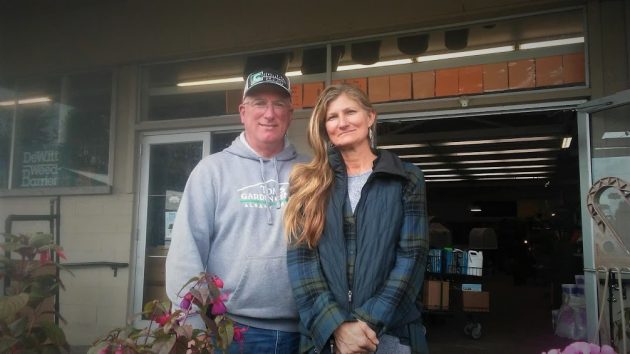 Tom and Annette Krupicka outside their store on Tuesday afternoon.