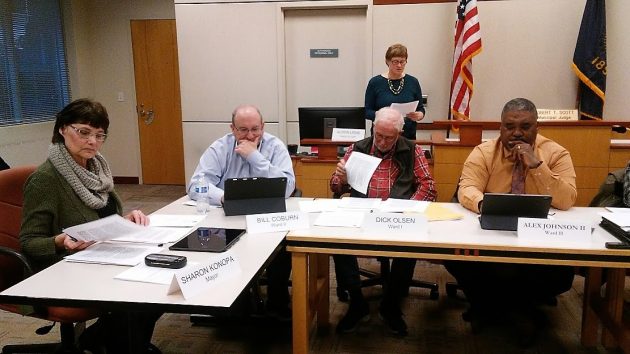 The Albany City Council Monday went through the ritual of hearing the mayor’s veto message in regard to accessory dwelling units. Her opponents may try on Wednesday to override her veto, but at last report they lack the fifth vote to get that done.

As she had done before, Mayor Sharon Konopa vetoed a proposed ordinance the council had again passed 4-2 on Feb.13. It would allow detached second houses of up to 900 square feet on all single-family lots, without requirements on off-street parking or ownership, as long as they met setback, height and other requirements.

There was a bit of squabbling Monday. Councilor Bessie Johnson complained that the veto was invalid because the message omitted the number of the proposed ordinance. Councilor Rich Kellum was unhappy with the mayor’s use of the word “compromise” in her message. There also was a question of whether the charter requires the message to be read by the city clerk, who wasn’t there, or if the deputy clerk would do. (You can read the message, all five pages, in the council agenda here.)

The council could have tried to override the veto Monday, but Kellum said that action should be on TV, which the council’s Wednesday sessions are. Councilmen Bill Coburn and Dick Olsen have supported the mayor in her stand against proliferating second dwelling units in single-family neighborhoods. Unless either switches sides, the veto stands.

Meanwhile, the planning department has been approving detached accessory dwellings of up to 750 feet as long as either the main or second unit is intended to be owner-occupied and there’s at least one added off-street parking space, as the current code requires. In deference to a 2017 state law, though, the city also has allowed such units in areas where the current code bars them.

The only dispute between Konopa and four council members is over the maximum size allowed and the ownership issue. With any luck, Wednesday should be the last time the subject comes up. (hh)

13 responses to “Fuss over veto prolongs spat on ADUs”