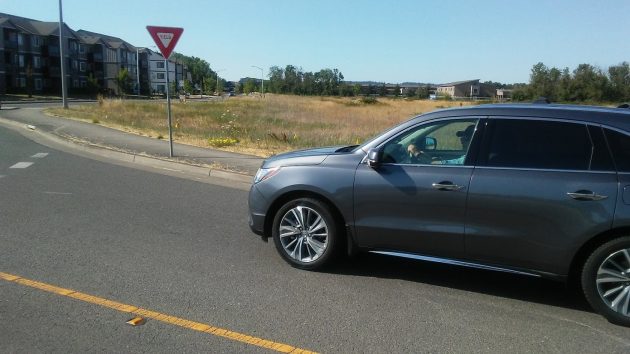 A car passes the northeast quadrant of the Knox Butte-Timber Ridge roundabout, where a developer has proposed to build a convenience store and gas station. In the background: Timber Ridge School.

Does the coming of electric cars make more gas stations unnecessary? Developers don’t seem to think so. Two new gas stations are being planned in Albany, one in the northeast and the other in the south of town.

On June 25, the city planning division posted a notice of an application for site plan review to build a covered fuel station at 2515 Geary St. S.E. This is one of the two South Albany tax lots at the corner of Geary and Grand Prairie Road that were recently rezoned to allow a gas station.

According to plans on file at the city, the station would have eight fueling positions in front of the existing convenience store and behind the automotive repair business on the corner. Drawings show it as a Shell station.

Earlier, on June 11, the city published a notice of the other gas station plan. This one is for a new convenience store and six fueling positions on a site northeast of the roundabout at Knox Butte Road and Timber Ridge Street. The site is still vacant but surrounded by newly constructed and planned apartment complexes as well as hundreds of new single-family houses in this fast-developing corner of Albany east of I-5.

Once the site plans are approved — which they weren’t yet as of Thursday — the developers can get building permits.

Plans like this may be seen as another indication that in the mid-valley the era of the of internal combustion engine is not about to end real soon. (hh)