From trash to apartments: Maybe 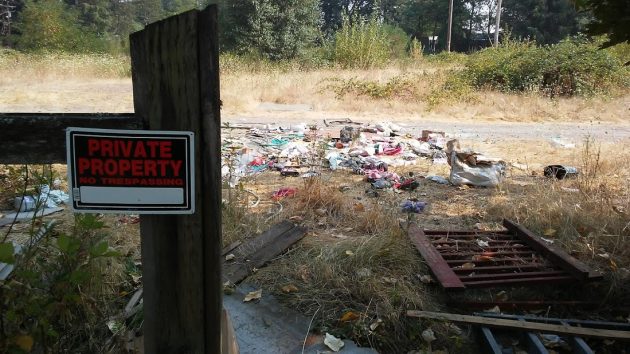 This was the view from the Simpson-Bowman trail on Aug. 8.

If apartments are ever built on this Albany riverfront site between Bowman and Simpson parks, at least the perennial trashing of the property will come to an end.

The property, about 6 acres on the river east of Geary Street, has been in the news off and on for decades. Once a sand and gravel operation, its conversion to a plant making roofing tiles (Permawood and later Cemwood and then Permatek), sparked a land-use fight in the 1980s. After the plant closed, new owners had to do an extensive environmental cleanup and talked about building apartments there, and Albany’s urban renewal district, CARA, expanded its boundaries to include the site.

In 2013, the Salem owners held a neighborhood meeting about their apartment plans, but nothing happened afterward, and the land was put on the market.

In May this year, the property changed hands for, according to Linn County property tax records, $1,085,000. The records show the new owner as Willamette River View Holdings, a limited liability company whose Salem registered agent is Robyn Roark Morley (CM3 Investments LLC).

When I looked at the real estate listing in March 2015, it said the site had been planned as “an upper-scale gated apartment complex” of three buildings with three to four floors each, totaling between 100 and 132 units. A rendering showed an entrance with the name “Riverpark Place.”

This past April 26, the Albany planning division held a pre-application meeting with the new owners about their apartment plans. But no definite plans have been filed.

Cables have been strung across the entrance on Geary Street to keep people and their garbage out. The place has been a dumping ground for years, and as passersby on the riverside trail can see, it still is.(hh) 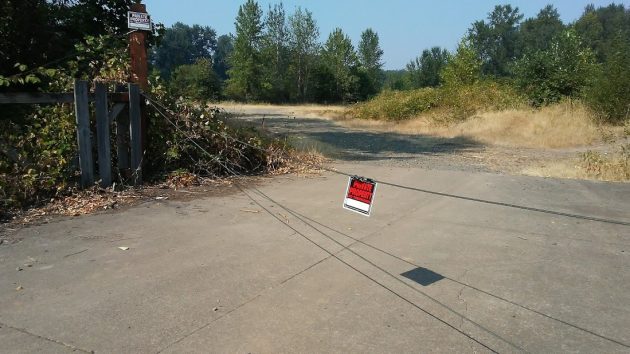 The entrance to the former Cemwood site off Geary Street opposite Bowman Park.