Fresh crosswalk lines, but why now? 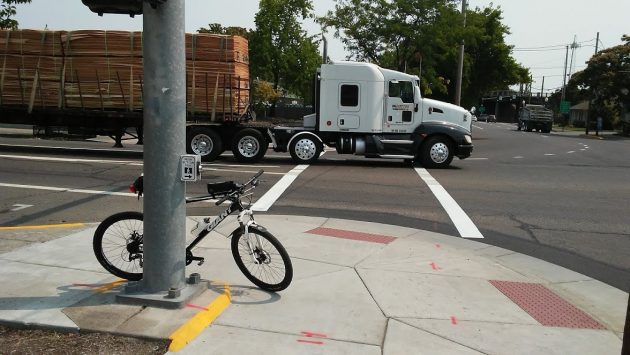 A reader, Larry Falk, was wondering last week why ODOT was painting crosswalks on Lyon and Ellsworth even though both legs of the downtown Albany couplet of Highway 20 will be repaved next month. Evidently it was a mistake.

“Unfortunately,” ODOT Public Information Officer Angela Beers-Seydel responded to my inquiry Tuesday, “it appears that we had an internal miscommunication. Our striping crew was not aware that the streets were going to be repaved in September and so striped the crosswalks as part of regular maintenance. I can say that it doesn’t happen often, but it did happen.

“Please let your readers know,” she added, “that we are sorry this happened and are looking at our communication processes to prevent it from occurring again. We agree, there are other places where that time and funding could have been used.”

Give ODOT’s spokeswoman credit for candor, but if this was a waste of money, it couldn’t have been much. When I took a closer look today, the only crosswalk striping that appeared new was on Ellsworth at Second, Third, Sixth, and Ninth avenues, and at Sixth it was only a partial job. On Lyon Street, the only crosswalk stripes that looked fresh were on the cross streets, which probably aren’t going to be resurfaced any time soon.

I any case, as the ODOT representative confirmed, the downtown segments of Highway 20 will be repaved and restriped in September. “And the crosswalks will be done again.” (hh)


9 responses to “Fresh crosswalk lines, but why now?”