For Wes Hare, appreciation and a raise 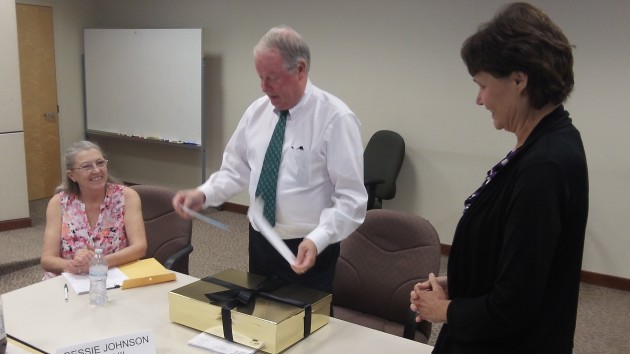 As it has in previous years, the Albany City Council has given City Manager Wes Hare another vote of confidence, along with a raise. This time, on Monday, it also presented him with a plaque and a $25 gift certificate from Fred Meyer.

The occasion was the manager’s annual performance review, held in a public meeting as usual although I was the only public in the room.

If there was any news, it was that Hare sounded hopeful that the long dispute with Lebanon over the Albany-Santiam Canal would be settled by the end of this month. Both cities put the negotiations over cost sharing and other issues in the hands of their public works professionals, and an accord now appears likely.

There was a good deal of talk about controlling costs of public services. Hare and council members said that Albany had done a good job, with its roughly $30 million general fund now only slightly higher than seven or eight years ago. It’s tough, though, they agreed, when state law has left cities little control over personnel costs in the two biggest cost centers, police and fire. In both departments, labor contract disputes are subject to binding arbitration.

The council worried whether Albany is paying its manager enough to keep him from jumping ship. Hare, 62, said he’s had offers but it’s unlikely he would leave for higher pay. The council noted, though, that former public works director Mark Shepard went to work as the Corvallis city manager and now makes more than his former boss.

Councilors voted to raise Hare’s salary 2.5 percent to $137,796 a year. His total compensation, including benefits, goes to $183,732.  The plaque he received — elaborately wrapped in a gold-colored box and green and yellow tissue paper — expressed the council’s appreciation. He got the gift certificate because the city presents one to all employees when they complete 10 years with the city. (hh)


7 responses to “For Wes Hare, appreciation and a raise”