For rail fans, these will be dream homes 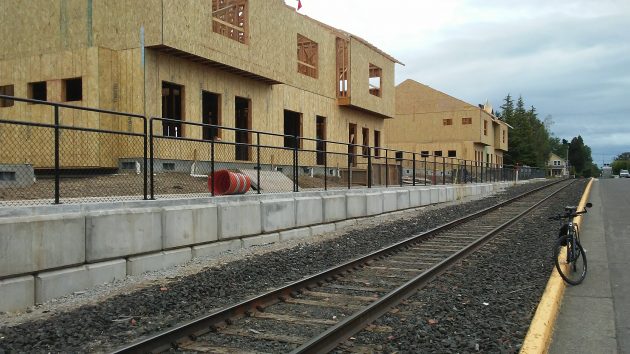 Talk about having a front-seat view of railroading. Or better yet a front-window view.

The Edgewater Village development between Water Avenue and the Dave Clark Path on the Willamette River is on one of my favorite bike routes through Albany. Which may explain the frequency with which you are treated — or subjected — to varying views as the construction there makes progress.

For a few months now Baldwin, the Albany construction company, has been busy putting up five more detached houses and about two dozen townhouses, some of which are situated along the old Oregon Electric rail line.

On YouTube, you can find countless videos of locomotives and trains doing what they do. Rolling down the track, and sometimes just standing still.  Rail fans love that stuff, even though in a contest of excitement, most of it may not be eligible for first prize.

So if you’re a rail fan, imagine living in one of these townhouses. Most days, the Portland & Western will put on a show for you, as trains rumble down the line at 8 or 10 mph on their way to and from Eugene.

So what if it takes place in the middle of the night. All the more intriguing to the true fan of rail. All anybody like that could want is more trains. (hh)

8 responses to “For rail fans, these will be dream homes”