For city, pot tax is not big money 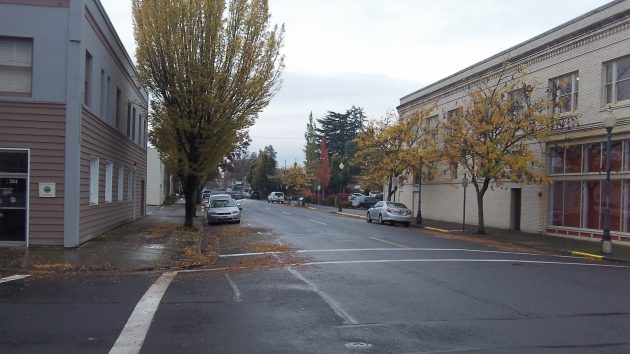 Pot taxes might not be enough to fund street upgrades in even one block, like this one downtown.

On Facebook, Albany’s borrowing $8.4 million from the state for downtown street upgrades drew this comment: “Maybe they should have pot sales and we would get that much from the $44 MILLION IN TAX REVENUE.” It’s a common sentiment and assumption. But whatever else commerce in cannabis would mean, a gusher of city tax receipts is not going to be it.

Oregon announced last week it had taken in $40.2 million in marijuana tax payments since January. This represented the 25 percent state sales tax on recreational pot sold by medical marijuana dispensaries. Third-quarter pot tax returns aren’t due till Oct.31, so the $40 million may represent just two quarters of receipts and the annual take may be double that. Quite a chunk of money, but the state plans to keep whatever it costs to administer the marijuana tax.

After this year, the sales tax on recreational marijuana drops to 17 percent, and medical marijuana remains untaxed, as now. The amount of revenue left over after the state takes its cut will be distributed as follows: 40 percent to the common school fund, 20 percent to mental health and drug services, 15 percent to the State Police, 10 percent each to counties and cities for law enforcement, and 5 percent to the Oregon Health Authority.

So if voters overturn the existing ban on recreational pot sales in the city, how much would Albany get from the cities’ overall share of 10 percent of the state tax? Hard to say because each city’s share would be based on the number of licensed recreational pot shops locally and statewide. Mayor Sharon Konopa, who opposes recreational pot commerce in the city, did some calculations based on four local dispensaries and 400 statewide, and came up with $72,000 a year. Add the 3 percent local sales tax on recreational pot, which also is on the Albany ballot, and the total grows to a hypothetical $92,400 a year, which Konopa notes is not quite enough to cover salary and payroll costs for one police officer.

Councilman Ray Kopczynski, who is campaigning to overturn the Albany ban on recreational pot businesses, does not count on a tax windfall either. Talking to people about the tax issue — the proposed 3 percent local sales tax — he says something like this: “Let’s say Albany ends up with five retail stores, and each does $1 million per year in sales. (And that may be a pipe dream.) OK, what’s 3 percent of that? After they frown and do the math, they realize the result — $30,000 per store equals $150,000 — is not a windfall by any means. That wouldn’t even fix a single block of road repair.”

But Kopczynski says what the city gets is less important than the overall effect of taxing recreational sales, which is that much of the state tax will go for education and enforcement generally. “That’s good,” he wrote in an email. “How much ‘we’ get will be moot if we don’t overturn the ban.”

As everybody knows, ballot measures to continue local bans on recreational cannabis commerce (retail, wholesale, producing and processing) are on the ballot in Albany as well as Linn County and several other Linn County towns. Kopczynski wonders what happens if voters uphold the Albany and Linn County bans. He fears the local area would be a hole in the state, a gap where the black market could thrive. “But again,” he adds, “I only get one vote.”  (hh)