For a happier Oregon? 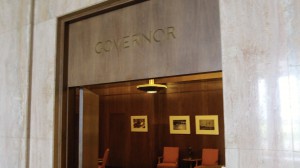 No, the governor was not inside. He was going to Bhutan.

Our Gov. John Kitzhaber and his lady are about to return from Bhutan. That’s a little kingdom of about three-quarters of a million people sandwiched between China and India. In recent years it made a name for itself with a concept it calls an index of “gross national happiness,” which purports to measure how content the people are with their lives.

The conceit is that Bhutan is different from the rest of the world, which pays undue attention to more mundane economic factors measured by “gross domestic product” or GDP. Bhutan, where Buddhism is the state religion, says it promotes happiness with policies serving its unique culture based on spiritual values.

Harry Esteve reported in the Oregonian on April 18 that Kitzhaber and his partner were scheduled to leave on April 18 to attend a conference in Bhutan on this approach to happiness. The paper said the conference described itself as “a unique opportunity for leaders across a range of sectors around the world to jointly explore key challenges in the field of innovating beyond GDP, to approach the deep-seated roots of these challenges and develop new responses and solutions.”

How any of this relates to Oregon in the here and now, I have no idea. Seems like most people in Oregon would be happier if it was easier to keep or find work, if the legislature didn’t try to burden people with higher taxes and more laws, and if the water off the coast was warm enough to swim. (hh)