For a friendlier council layout 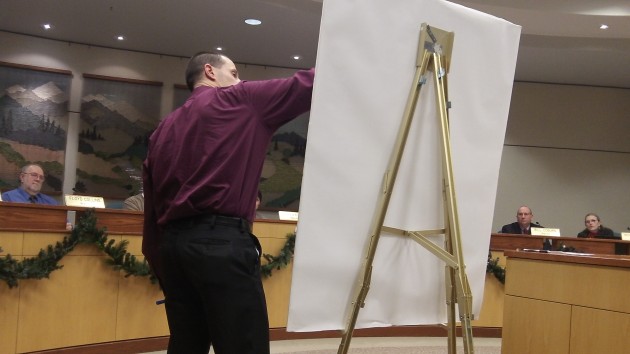 It’s sometimes hard to see the councilors even without the (rare) interference of a visual aid.

If they asked me, I would recommend changes in the layout of the room where the Albany City Council meets. People might appreciate it if the arrangement did not force councilors and their staff advisers to look down on the common folk below. Seems like in our system it would be more fitting if they looked up.

The council chamber layout has been unchanged since City Hall was opened about 20 years ago. As far as I know, nobody has complained about the imperial layout of the raised council dais and protective parapet overlooking the space where the audience sits.

But to me, the layout was more suited to the idea of representative government in the old post office building on Second Avenue, which served as city hall when I first set foot in Albany in the 1970s. The council met in an auditorium. Members were arranged on the stage, looking out at stadium seating rising in front of them. This gave the audience a good view of their municipal representatives from pretty high up.

The present council chamber also serves as the site for other kinds of meetings, so remodeling it as an auditorium would not work even if the council were willing to give up its position of towering above everyone else. But with a little help from a designer, something might be done to make the arrangement more friendly to the audience.

There are other things that should be fixed.

♦ Council members sit more or less side by side, and in debate they often lean away from the microphones fixed in front of them. Lapel mikes would do a better job.

♦ The rostrum for people addressing the council remains awkward. It has room for only one person. When two or more address the council, they must jump up and yield the spot only to change places again when they get another question. A table with three or four chairs would be more convenient, but a move to set one up was abandoned some time ago.

♦ And as for getting people to watch council meetings on cable or online, it would help if the person speaking was also the person seen on the screen, but often that is not the case. An upgrade in equipment would give viewers the idea that the council actually wants people to watch.

As I said, these are moves I would suggest if they asked me. But nobody has, so don’t hold your breath for anything to change. (hh)


3 responses to “For a friendlier council layout”