Food waste: Let the state keep out of it 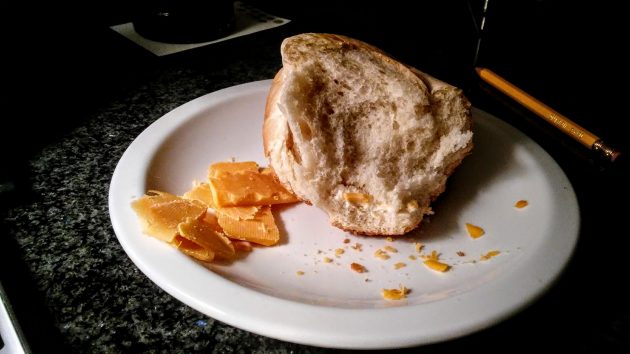 This was not food waste but a snack while writing about the state’s plan tio reduce wasted food.

As part of Governor Brown’s recent executive edict to reduce greenhouse gas emissions, the Oregon Department of Environmental Quality has published a plan to reduce food waste. What it boils down to is a plan to require citizens in Albany and around the state to clean their plate or else.

The plan really isn’t a plan yet. It’s a plan to make more plans, plans to acquire resources to carry out the planning, and then to impose whatever strategies officials devise by putting forth rules that citizens must obey.

The DEQ claims that 25 to 40 percent of the food produced or imported in this country is wasted. And it thinks that the government, the state government in the case of Oregon, can do something about that. Well, good luck!

You’d think that producers, importers and distributors, and especially retailers would have enough incentives to prevent spoilage. And that consumers, you and me, don’t go out and intentionally buy more food than we think we want or think we can use.

Stuff happens, though. We buy a pound of  burger, then put it in the freezer for later, but later never comes because we don’t want to bother with thawing that lump of flesh which by now is gray. So eventually, after taking up space for months, the lump gets thrown out.

What’s the state proposing to do about that? Require taxpayers to file monthly reports on the contents of their freezers along with plans for what to cook and what to discard? And then hire inspectors to do spot checks? Who needs search warrants to search your freezer when inspections could be justified for the sake of the planet’s environmental health?

Part of the DEQ’s vision is an increase in the amount of food waste and garbage that is collected and turned into compost.  (Is there a shortage of compost? Can’t the compost business be left alone to seek its own balance of supply and demand?)

In May 2017, Albany turned down a proposal by Republic Services to collect yard debris weekly instead of biweekly so that the bins could also receive food waste. This would have cost consumers more money, and in the absence of overwhelming demand, the council wisely said no. So now, if the regulators in the DEQ have their way, food waste collection and recycling might become mandatory along with the higher price.

Sure, it’s too bad that a lot of food goes to waste. But we don’t need regulators to try to prevent, at public expense, what is a natural feature of a big economy where, thank God and our farmers, usually there’s plenty of food to be had.

You want to prevent people wasting food? Create conditions where you need a government ration card in order to buy a stick of butter or an egg. (hh)


9 responses to “Food waste: Let the state keep out of it”