Fog lights: Use only when needed – Hasso Hering

Fog lights: Use only when needed 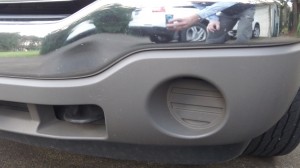 One way to avoid misuse of fog lights: Don’t have any.

Three years ago, state authorities were moved to remind Oregon drivers about the correct and legal use of fog or auxiliary lights. The advice didn’t take. “It seems to me,” reader Steven Mills correctly observes in an email, “that hundreds of drivers driving with fog lights turned on need an education on the Oregon laws.” His is a common complaint from drivers who are often blinded by the use of fog lights coming their way.
In January 2011, ODOT and the Oregon State Police noted that fog lights had become much more common in recent years. The lights are intended to be used at low speeds and, as the name implies, when visibility is bad. But after sunset and during other times when visibility is low, the law says they must be turned off when an oncoming vehicle approaches. And when visibility is normal, they should be turned off period.

“It is not appropriate to drive with fog or auxiliary lights left on all the time,” the state agencies said. More than “not appropriate,” it’s unlawful. The OSP says fog lights must be used like high beams, which means they must be turned off within 500 feet of an oncoming vehicle and within 350 feet when following one.

One more thing: Fog lights must be either white or amber. If they’re blue, they’re against the law. (Which makes me wonder how some vehicle owners get away with headlights that are not just overly bright but also blue.)

You’d think that if the law wasn’t enough, consideration for others would make drivers turn off their fog lights as required. As for me, I never found them all that useful even in the fog, so now I don’t have any, which means I don’t have to remember to switch them off as the law demands. (hh)

2 responses to “Fog lights: Use only when needed”