Flowers for Aurelio: A roadside tribute 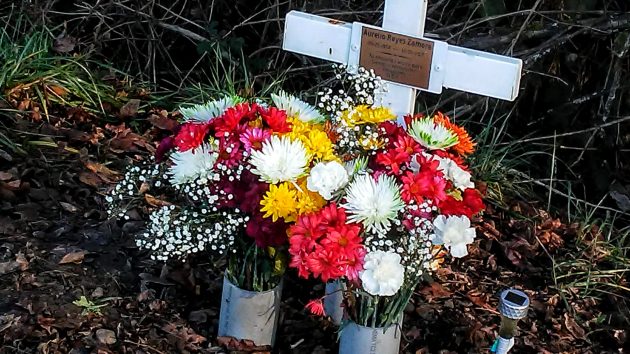 Some roadside memorials in the Albany area – – and elsewhere, too — start fading away after a time. But not this one on Bryant Way.

This one is near the spot where the body of Aurelio Reyes Zamora was found on Oct. 30, 2017. He was an Albany resident who had worked in farming and other jobs. His family had reported him missing about a month before he was found. He was 43 years old when he died.

When last I wrote about this, in the summer of 2019, the Linn County Sheriff’s Office investigating the death told me it was still an open case. I’ve heard nothing since that the status had changed. Originally the sheriff’s office thought it might have been a case of homicide. But they dropped that theory when the medical examiner found no signs of violence.

The first time I saw the sturdy roadside cross and plaque was in January 2019. Now I look for it every time the bike takes me past it, which is often.

On the day after Christmas, a family gathered at the spot, and when they were gone, these colorful bouquets were left behind. The flowers are a reminder to all of us who pass there that Aurelio Zamora is remembered by people who knew and loved him. May he rest in peace. (hh)


One response to “Flowers for Aurelio: A roadside tribute”