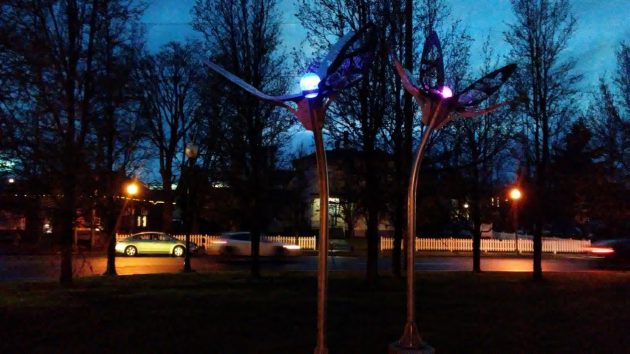 Here are two of the four wildflower sculptures with their petal lights on, as seen at dusk on Thursday.

You may recall the Feb. 23 story here about the colored LEDs on Albany’s downtown wildflower sculptures. The good news is that the lights have been fixed.

The bad news, if you can call it that in this Epoch of Bad News, is that only three of the four lights were working on Thursday night.

Last month, a reader of this site noticed that the lights, an integral feature of this $80,000 public art installation downtown, had failed to function for a couple of weeks, and she asked about it.

Tom Valentino of the city checked it out and found that a circuit board had failed because of moisture. A company named Frequency Productions shipped a $250 replacement last week. Now the part has been installed in the controller, and a waterproof cover has been added.

I went down there Thursday night to see. Turns out that the LEDs on three of the flower sculptures were working. The fourth was dark, as you can see: 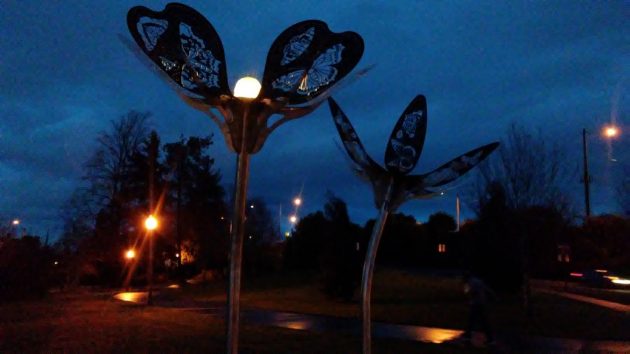 Looking toward the Pacific Boulevard off-ramp on Thursday night.

It had rained a little during the day. Maybe more problems with something getting wet?

Perhaps it doesn’t matter all that much whether the lights are on or off. They are not very bright and change colors slowly. They don’t exactly shimmer or glitter. Even when they’re on, they don’t stand out among the street lights all around. (hh)