Flooding in May? Well, yes, at Bryant Park

Written May 9th, 2022 by Hasso Hering
Comments: one response. 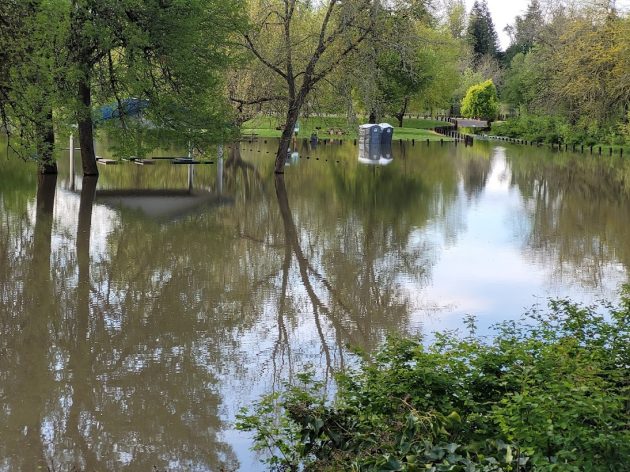 The front parking lot of Bryant Park was a giant puddle on Monday evening.

Only a couple of days ago the Willamette and Calapooia rivers overflowed their banks a little in Bryant Park. On Monday the water rose higher and flooded the upper road and parking lot as well.

Last week’s heavy rain had tapered off by Monday, so what was the cause of the unseasonal jump in the water levels of these two rivers near the point where they meet in Albany?

Maybe the discharges from dams in the upper part of the Willamette Basin had something to do with it. (On the Willamette anyway; there are no dams on the Calapooia.)

It’s a little hard to tell from the graphs available online, but it looked as though the Army Corps of Engineers was discharging water from the reservoirs as fast as — or even faster than — it was flowing in.

The Natonal Weather Service reported that the Willamette at Albany crested at 17.3 feet just before 8 on Monday night. By the end of this week, on Saturday, the river is expected to be back down to 9 feet on the Albany gauge.

So the parking lot and upper road in Bryant Park should not stay under water long. But chances are there will be mud and debris left behind once the water drains away. (hh)


One response to “Flooding in May? Well, yes, at Bryant Park”