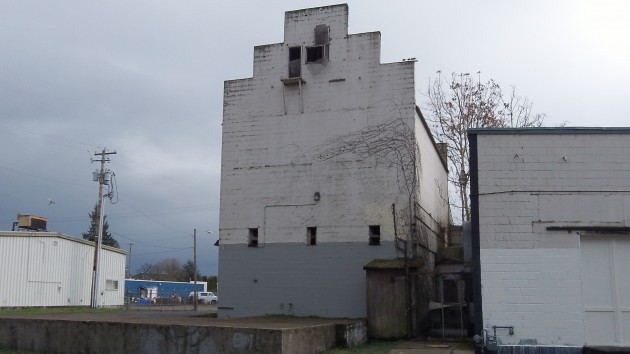 The Borden Building “tower,” which would be repaired and repainted.

A couple of structures in east Albany could  get a new look with help from urban renewal funds if the city grants their owners’ requests. The proposals are on the agenda for review when the Central Albany Revitalization Area advisory board meets at 5:15 p.m. Tuesday, March 4, at City Hall.
Both projects were proposed under CARA’s small-grants program:

— Owner John A. Boock is asking for $4,500 to cover half the anticipated cost of painting the tower portion of the Borden Building at 635 Water Ave. N.E., site of the Delux Brewing Co. The exterior door and window openings would be repaired. 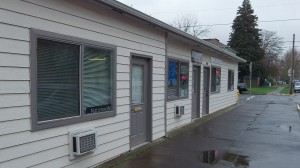 –Michael D. Allen is asking for $5,000 toward the estimated cost of $11,500 to fix up his building at 433 Third Ave. S.E., the home of Allen & Associates Insurance Inc. The proposal calls for removing five air conditioning units mounted in the walls, replacing the siding where required, adding a 3-foot stone fascia around the bottom of the exterior and repainting the building.

Also on the agenda for the CARA board meeting is a review of potential public infrastructure projects on which the program might spend up to $3.1 million. “Streetscape improvements” along Water Avenue and Main Street and dressing up the Thurston Street canal, among other projects, have been suggested by the city staff. Competing with that idea is the suggestion, aired at a recent meeting of the citizen review board for police and fire facilities, of spending the $3 million toward construction of those public facilities, which would lower the amount of a potential bond issue.

Tuesday’s CARA meeting was set after a previously scheduled meeting had to be canceled because of an illness. (hh)