First the corona, and then an election 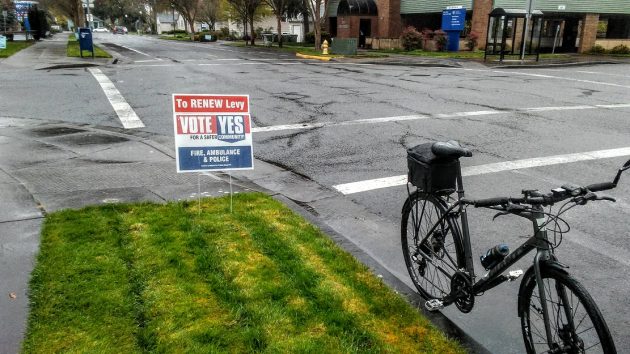 At the corner of Seventh and Elm, somebody thought of the election next month.

As if the coronavirus panic was not bad enough, there’s an election right around the corner. But nobody around here has paid it much attention so far.

The primary election is on May 19. A couple of weeks before, in early May, ballots will be mailed out. We must hope that by then the worst of the contagion is over. If it isn’t, at least people can vote from their kitchen table. They won’t even need a stamp to mail their ballots back.

What reminded me of this Saturday was the campaign sign that somebody stuck in the grass on Elm Street. It calls attention to the Albany ballot measure to renew, at the same rate for another five years, the local option tax levy that augments the city’s funding for the ambulance and fire service and the police department.

What else is on the ballot that’s of local interest?

In Linn County, longtime Commissioner Roger Nyquist is the only candidate, Republican or Democrat, for Position 2 on the board. But for Position 3, the forthcoming departure of Republican Will Tucker has invited a scramble to succeed him. State Rep. Sherri Sprenger of Scio is competing for the Republican nomination against Jack Tacy of Lebanon, Bill Schrader of Albany,  and Kerry Johnson of Scio. Scott Bruslind of Lebanon is alone on the Democratic ballot.

For the legislature, the sole candidates on the respective ballots in Albany-centered House District 15 are Shelly Boshart-Davis, the Republican incumbent, and Democrat Miriam Cummins, who lost a contest for Albany School Board in 2019 but was elected to the regional Education Service District board.

For Congress, 4th District Democrat Rep. Peter DeFazio has held the seat for decades and, surprisingly, has a Democratic opponent in a Eugene community organizer (whatever that is exactly) named Doyle Elizabeth Canning. For the Republican nomination, the candidates are a Eugene engineer named Nelson Ijih and a Roseburg resident, Alek Skarlatos, who listed “sniper” and “actor” as part of his occupational background.

In the 5th District, Democratic Rep. Kurt Schrader is seeking another term in Congress. Two Democrats oppose him, and four Republicans want the chance to run against the winner. (You can look up the details in the secretary of state’s candidate listings here. (Part of North Albany is in Schrader’s district, but I don’t know if he has ever set foot in the place.)

As for the local measures, in Benton County there’s also a revision of the Adair Village charter. The new version would allow, of all things, the creation of council wards in the tiny town.

In Albany, the city counts on the renewal of its local option tax for the fire and police departments. No one yet knows how much the corona shutdown will have hurt property owners’ future ability to pay their real estate taxes. But I would hope the current emergency has, if anything, heightened the longstanding voter support for what the people in these departments do. (hh)


5 responses to “First the corona, and then an election”