Findings back demolition of three houses 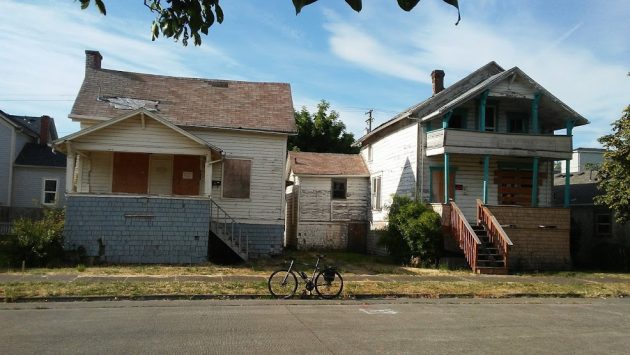 Two of the three condemned houses at Fourth and Calapooia on Monday afternoon.

Three old houses in Albany’s Monteith Historic District, condemned by the city and boarded up, are too far gone to be economically restored and should be allowed to be razed. Essentially that’s the conclusion of 18 pages of “findings” the city council is expected to adopt when it meets on Wednesday.

Last October, the council approved demolition of the houses after 90 days, allowing the extra time in case somebody wanted to buy the structures and move them. The owners offered the structures for one dollar, but no one came forward to move them.

On appeal, the state Land Use Board of Appeals ruled the council did not have adequate findings to back up its decision and Councilor Rich Kellum should not have taken part because of his comments on the case published online at hh-today. LUBA remanded the case. Now findings have been prepared, and the council, without Kellum, will consider adopting them on Wednesday night.

After listing factors such as the condition of the houses and the cost of restoration, the findings say: “Considering all of the above, the city council concludes that the factors weigh in favor of approving the applicants’ request for demolition of all three houses.” (If you want the entire text, you can wade through it here.)

Barring further appeals or court action, that should end the year-long controversy over these derelict structures and allow the owners, Albany homebuilders Tina and Mark Siegner, to replace them with new housing. They have mentioned rowhouses compatible with the historic neighborhood as one possibility.

At a council work session Monday, opponents of demolition argued under “business from the public” that the record should be reopened and a new hearing held. But Wednesday’s occasion will not be a hearing, nor will additional testimony be accepted if the council goes ahead and adopts the findings.

Also at the work session, the council decided against turning the city’s Landmarks Advisory Commission into a purely advisory board that makes only recommendations and no decisions. Some councilors had proposed this, but then the council changed the way the volunteer Landmarks members are appointed. Also, it was pointed out, all Landmarks decisions can be appealed  to the council already. Or, if the council doesn’t like a decision, it can take the case up on its own, as it did with the Siegner demolition request last year. (hh)


14 responses to “Findings back demolition of three houses”