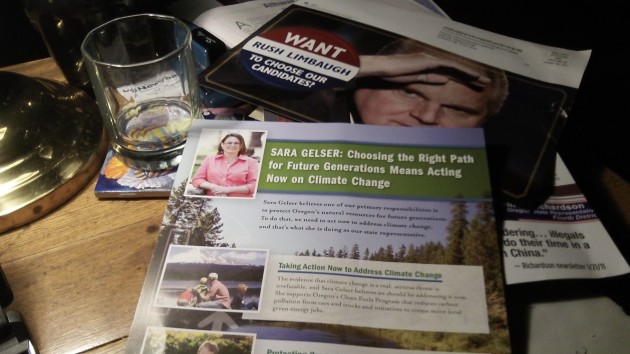 On a desk buried by campaign ads, the one on top contains a helpful reminder.

Much of the campaign propaganda raining down on us now is based on distortion and falsehood. Now and then there’s a useful exception. A newly arrived mail piece, for  example, has just reminded us that, unfortunately, one mid-valley candidate favors a state program to make motor fuel more expensive.

“Choosing the right path for future generations means acting now on climate change,” says the colorful ad backing the Democrat hoping to unseat Sen. Betsy Close in the Albany-Corvallis state Senate district. “The evidence that climate change is a real, serious threat is irrefutable,” the ad asserts, “and Sara Gelser believes we should be addressing it now. She supports Oregon’s Clean Fuels program that reduces carbon pollution from cars and trucks and initiatives to create more local green energy jobs.”

Democrats in the 2009 legislature enacted this program, which requires the fuel industry first to report the “carbon intensity” of gasoline and diesel and then to reduce it by 10 percent over 10 years. The program has a sunset or ending date in 2015, and the legislature has twice refused to remove that date. Governor Kitzhaber nevertheless directed the Department of Environmental Quality to go ahead and launch the program’s second phase, the carbon-reduction requirement.

The idea is to encourage the Oregon development of ethanol and biodiesel, and the only way that can be done is to make traditional fuels more expensive than they otherwise would be. This is the supporters’ approach to subsidizing an industry that can’t seem to prosper on its own.

Through lower mileage and higher food costs (as ethanol is made from corn), we are already paying for bad fuel policy because the law requires gas to contain 10 percent ethanol. Unless it is allowed to die as scheduled, the clean fuels law will have us make do with even less efficient fuel while paying even more.

The ad reminding voters that Sara Gelser supports this misguided program comes from the Oregon League of Conservation Voters. Thanks, guys, for pointing this out. (hh)