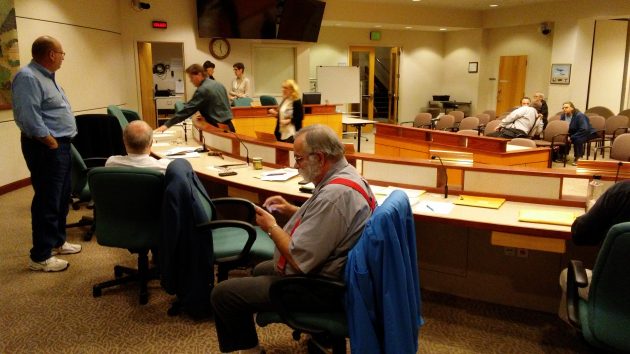 At half past midnight Thursday, the council took a break so City Attorney Sean Kidd could draft the pot ordinance that finally passed.

Just before 1 this morning, after a marathon session that the mayor said was the second-longest of her tenure, the Albany City Council passed an ordinance that allows existing medical dispensaries to seek state licenses as recreational marijuana retail stores.

All four council members present voted for the compromise measure, as did Bessie Johnson, who participated by phone. Councilor Dick Olsen was absent in an apparent attempt to thwart passage of the far more restrictive ordinance that had been on the agenda.

The new law takes effect immediately, and city officials said that today they would start issuing “land use compatibility statements” required before the Oregon Liquor Control Commission will process license applications by would-be recreational pot businesses. Three of Albany’s medical pot dispensaries have asked for those statements so they can become recreational retailers.

Wednesday’s marijuana debate spilled over into Thursday morning because it didn’t even begin until 10:35 p.m. Starting at 7:15, the council had busied itself with a slew of routine business before launching into the main event.

The ordinance on the agenda would have banned recreational marijuana businesses including retail shops almost everywhere in town by saying they could not be within 300 feet of properties in residential and several other zones, with the distance measured from property line to property line. The final version approved 5-0 retains those restrictions for pot producers, processors and wholesalers. But it removes retailers, leaving them subject to a city law passed more than a year ago. That law has the same 300-foot limit, but the city has measured the distance not from the boundary line of the property but from the actual marijuana facility. That allowed for some room for the existing dispensaries to set up, and they can now, if they want, become recreational retailers as well. So can others similarly situated.

Retailers must still pay the city an annual fee in an amount yet to be determined by the council. That’s in addition to the state licensing and other fees. The adopted law also requires marijuana producers and processors to “be located in a fully enclosed facility.” Some councilors had worried about odors from outdoor grows. (hh)