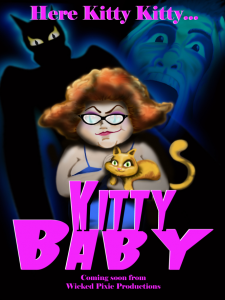 The poster for the movie for which scenes were shot at City Hall.

If your eyebrows shot up over nudity in a movie for which scenes were shot at Albany City Hall, you can lower them again. No such luck.

It was Gordon Shadle, a keen observer and frequent critic of city government, who alerted me to “Kitty Baby.” That’s the name of the movie. Back in August, City Manager Wes Hare told the city council he had been approached by Wicked Pixie, a Salem company, that needed office space for some filming. He had agreed the company could use his office but would have to hire Valley Merchant Police to provide security.

I remember Hare mentioning this in August but ignored it. Shadle spotted the item in the council minutes, included with the council’s agenda for Nov. 4, and went online. There he found a casting call for “Kitty Baby,” described as a “shape-shifting office romance horror comedy.” The title role is that of a plus-sized woman over 30 who is a cat hoarder. The role “requires nudity,” and whoever got the part had to be “comfortable with on-screen intimacy.”

So, what was going at City Hall when filming took place? Neither nudity nor intimacy of any sort, Melanie Dahl told me when I reached her in Salem today. She and her partner, Dan McCloy, are the principals in Wicked Pixie Productions, which as you might guess is a very small enterprise. The City Hall scenes, she said, involved only actors playing office workers gossiping and setting up a romance that would unfold later in the film.

That squares with Hare’s response. “The movie makers did shoot some scenes at City Hall last week under the watchful eyes of the Valley Merchant Police, which they paid for,” Hare emailed me. “I didn’t hear about any nudity or other inappropriate behavior at City Hall.”

Dahl told me that she and McCloy, her partner in life as well as in Wicked Pixie, make movies pretty much as a hobby and show them at festivals and independent theaters. They also sell them as DVDs available at Amazon. This current production still has two months of filming to be done. Editing will take some more time, and then the result will be ready in the spring of 2017.

3 responses to “Film nudity at City Hall? Sorry, no!”